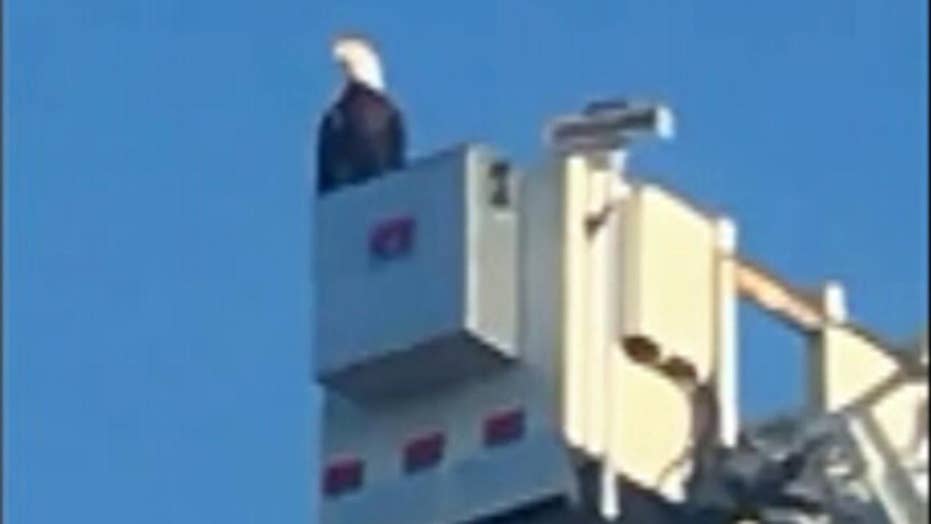 Raw Video: Members of the Andover Fire Department in Andover, MN, spot a bald eagle perched on top of their tribute for those lost in the September 11th attacks.

Firefighters in Minnesota were in awe on Tuesday when an eagle — the ultimate symbol of American patriotism — perched on a 9/11 memorial.

The fire department in Coon Rapids, a town roughly 15 miles north of Minneapolis, set up its aerial ladder from a fire truck on a bridge along Highway 10 to take part in an anniversary tribute.

An eagle in Minnesota spent a moment of 9/11 perched in a fitting place on Highway 10. (Coon Rapids Fire Department)

The eagle landed on one of the aerials after fire officials set it up, and stayed put for less than a minute.

Still, Chief Jerry Streich, of the Andover Fire Department, captured the patriotic moment in a Facebook Live feed, and told news station KARE the bird had positioned itself around one of the national moments of silence.

FLASHBACK: 9/11 AS IT HAPPENED

"Isn't that unbelievable?" Streich said. "This eagle just landed on the aerial, while we're doing the 9/11 memorial. Phenomenal."

"There's no better symbol to represent America today than a flag but then for an eagle to land on a fire truck holding a flag," Andover Fire Chief Jerry Streich said. (Coon Rapids Fire Department)

Steich said that it was the department's 17th annual memorial to 9/11, and that after looking at the bird a few times, he figured he should capture the moment.

"There's no better symbol to represent America today than a flag -- but then for an eagle to land on a fire truck holding a flag," the fire chief said. "I mean, it doesn't get much more symbolic than that."