The new people in charge want to look more closely at the rights of the accused under Title IX; Kristen Fisher has more for 'Special Report'

Students accused of sexual assault will be allowed to cross-examine their accusers, according to new federal rules governing how campus sexual assault cases will be handled.

Education Secretary Betsy DeVos will likely publish the rules this month, with a public comment period to follow, the Wall Street Journal reported.

“Courts have recognized that cross-examination is an essential part of the process of figuring out the truth in cases where credibility is a factor,” said Joe Cohn, legislative and policy director at the Foundation for Individual Rights in Education, which advocates for more due process for those accused of campus sexual assault.

The provisions fall under Title IX and will restrict eligible cases to those that occur on campus.

DeVos scrapped Title IX guidance in 2017, preferring to issue her own on the matter.

But a lawsuit against the Trump administration claims DeVos' decision to lower the standard of evidence used in campus sexual assault cases is motivated in part by sexism.

“What you see is that this administration is buying into the sex stereotype that women and girls lie about these types of things, and they’re making policy based on that view,” Karianne Jones, counsel for Democracy Forward Foundation, told the Huffington Post.

A spokesperson for the Department of Education called the suit baseless and politically motivated.

“She [Secretary DeVos] and OCR staff met with a number of people on this important issue -- including survivors, falsely accused students, college presidents and university GCs -- and the message was very clear from all of them: We have to get this right on behalf of students and the current process isn’t serving students well," the spokesperson said.

"[Secretary DeVos] and OCR staff met with a number of people on this important issue ... and the message was very clear from all of them: We have to get this right on behalf of students and the current process isn’t serving students well."

The cross-examination rule reflects concerns voiced by some who believe students accused of sexual assault should be given more opportunities to defend themselves.

“Survivors, victims of a lack of due process, and campus administrators have all told me that the current approach does a disservice to everyone involved,” she said.

“Survivors, victims of a lack of due process, and campus administrators have all told me that the current approach does a disservice to everyone involved.” 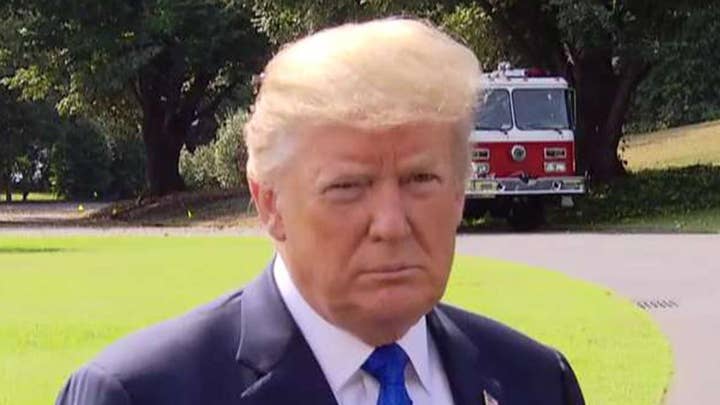 An Education Department spokesperson declined to comment on the rules before they are published.

According to the provision, cross-examination would be mandatory, but questions could be asked through a neutral party and the students could be seated in separate rooms.

Questions about the accuser's sexual history would not be allowed.

However, some worry the new rules could discourage victims from coming forward.

“If someone tells their story and then they need to be questioned on it, that can be an incredibly invasive and traumatizing experience,” said Anurima Bhargava, an Obama-era Justice Department official who oversaw civil rights enforcement in educational settings.

President Trump has voiced concerns about young men accused of sexual misconduct being presumed guilty and subjected to an unfair process.

He suggested the #MeToo movement targeted young men, calling it a "very scary time for young men in America" when "you can be guilty of something you may not be guilty of."

University officials said the Obama-era rules put a hardship on their ability to handle sexual assault cases, with many schools fearing any mistake could result in a federal investigation.

The new rules will not contain a definition of gender. The Trump administration is looking at issuing a legal opinion stating its belief that gender under Title IX is determined by a person's genitals at birth.