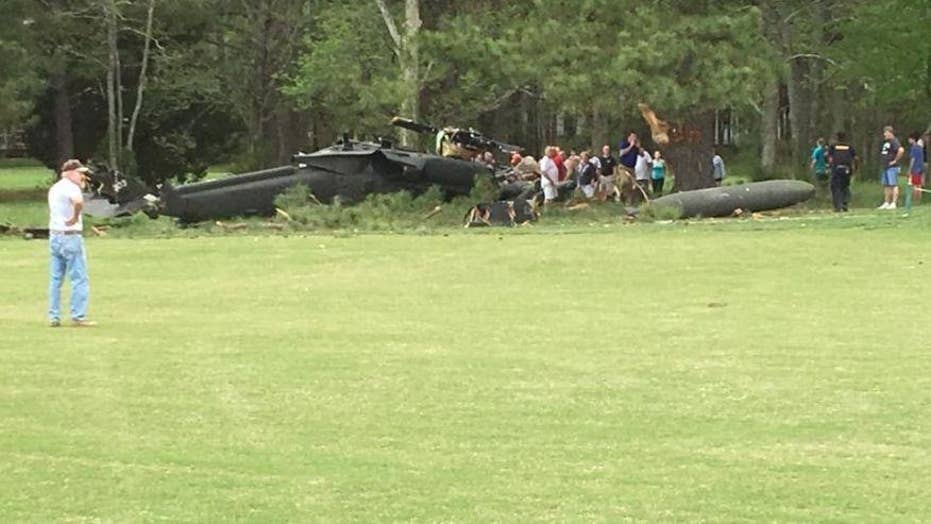 Three military personnel onboard, one taken to hospital

One crew member was killed and two others were injured Monday when a military helicopter crashed on a southern Maryland golf course.

The injured crew members were taken to the University of Maryland Shock Trauma Center in Baltimore. The Army said one of the injured crew was in critical condition, while the other was in serious condition. The crew members' identities were not immediately available.

"We are deeply saddened by this loss within our community," Maj. Gen. Bradley A. Becker, commanding general, Joint Force Headquarters National Capital Region and the U.S. Army Military District of Washington said in a statement. "Our condolences go out to the families and friends affected by this tragedy, and our team is focused on supporting them during this difficult time."

The cause of the crash was not immediately known. The Army said it was sending a team from its Combat Readiness Center to conduct an investigation.

Kevin Bowen, who works in the pro shop of the Breton Bay Golf and Country Club in Leonardtown, said he saw the helicopter "flying kind of low" and then "saw it spinning" before it went down between the third and fourth holes of the golf course.

Dorothy Harper, who lives across the street from the golf course, said she saw the helicopter just before it crashed.

"I was outside in my front yard when I saw the helicopter come over right across the street from my house. I saw pieces actually falling off the helicopter," she said.

Harper said she didn't see smoke or flames, "just pieces falling out of the sky."

Shortly after, emergency vehicles started rolling in, she said.

Army investigators were driving around the course in golf carts Monday evening, placing evidence markers near pieces of debris.

The crash came less than two weeks after a fighter jet crashed into a wooded area in Prince George’s County.

The pilot on that mission ditched the jet and was treated for minor injuries. No one else was hurt.