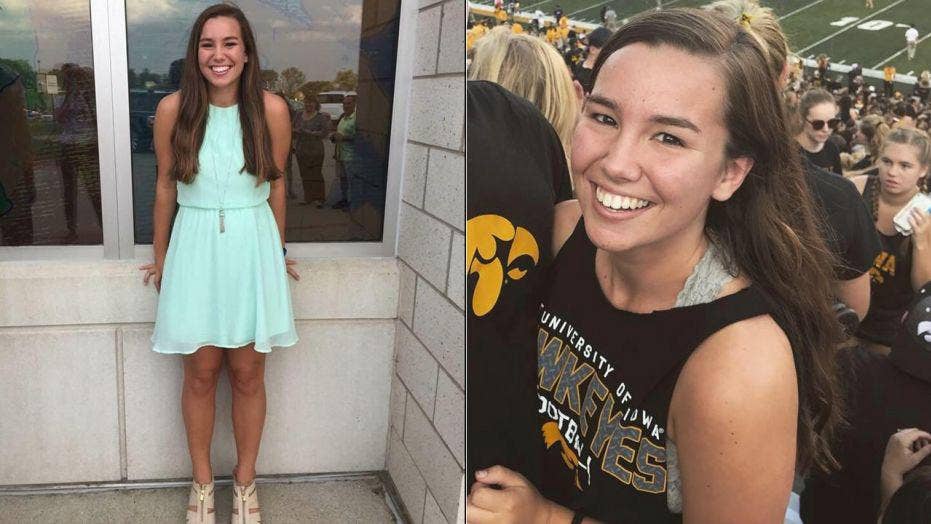 Investigators poring over a pig farm and numerous other properties in Iowa say they've found no traces of the missing 20-year-old college student last seen more than a week ago while jogging.

As the search for Mollie Tibbetts continued Friday, Rick Rahn, a special agent in charge at the Iowa Division of Criminal Investigation (DCI), told Fox News that they "anticipate additional sites" will come into the picture.

“We’re looking at anybody and everybody that would lead us to locating her," he said, noting that “her missing is suspicious” and that authorities are “hoping to locate her sooner than later."

Rahn also told Fox News that investigators have received "zero information" indicating that Tibbetts was a runaway or had a medical reason for her disappearance.

The University of Iowa sophomore was staying at her boyfriend’s home at the time of her disappearance and was there to watch his dogs because he had a construction job about 100 miles northeast in Dubuque.

Police revealed earlier this week that her boyfriend and brothers have been ruled out as potential suspects.

Her mother, in an interview with ABC News on Friday, said Tibbetts had been looking forward to an upcoming trip to the Dominican Republic that she planned with her boyfriend.

"First part of August. She had her first passport," Laura Calderwood said.

Officials have said though that they’ve “put together a pretty solid timeline” of what Tibbetts was doing prior to July 18.

Friends and family say Tibbetts, an avid runner, was usually wearing her Fitbit. Federal and state investigators have since been reviewing data from the device – and her Snapchat account -- in hopes of zeroing in on her location.

Mitch Mortvedt of DCI told Local 5 on Thursday afternoon that more than a dozen agents from his group and the FBI have been conducting searches of several properties in Iowa, including a hog farm, but nothing has been found. He added the searches have not expanded outside the state and there are currently no suspects in the case.

The hog farm searched was in Guernsey, about 8 miles from Brooklyn, according to KCCI.

Mortvedt revealed that, as of Thursday afternoon, more searches are ongoing in rural areas.

“We’re checking gas stations and convenience stores and any location with easy access to a highway or the interstate,” Mortvedt also told The Gazette. “We’re asking questions and collecting surveillance footage and check it to see if Mollie was caught on camera or if there was someone in the area acting suspicious.”

Authorities said with each passing day Tibbetts isn’t found, the likelihood grows she was taken against her will.

Poweshiek County Sheriff Tom Kriegel told ABC News earlier this week that Tibbetts’ brothers and boyfriend have been cleared of any wrongdoing in the case.

"It's been a whirlwind," one of her brothers, Jake Tibbetts, told the station. "We've gone from sad, to worried, to just anxious and clueless. Up at 5 in the morning looking for her in every field, every ditch, every creek."

The sheriff’s office said anyone with any tips or information relating to Tibbetts is urged to call 641-623-5679 or send an email to tips@poweshiekcosheriff.com.