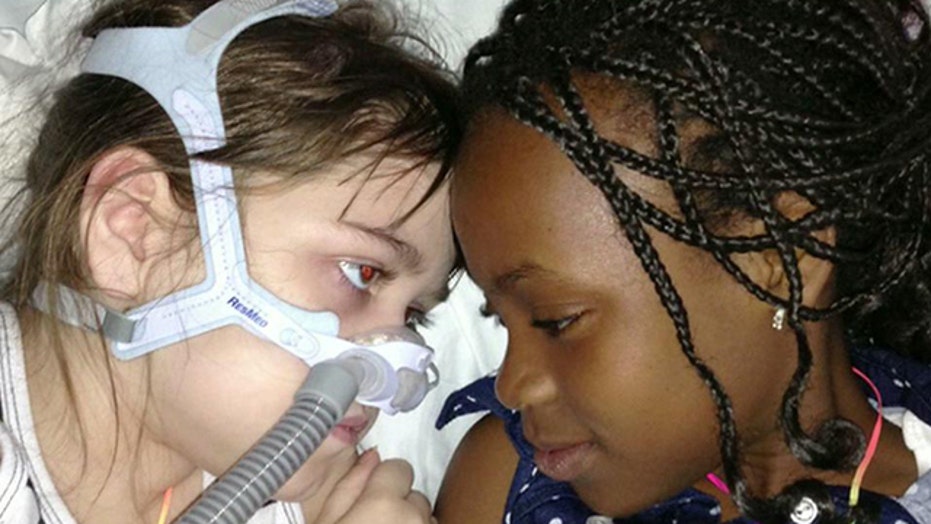 Little girl dying as she waits for organ transplant

Aunt of Sarah speaks out about her condition

Secretary of Health and Human Services Kathleen Sebelius is calling for a review of policies concerning who gets lungs for transplant in light of the case of a Pennsylvania girl dying of cystic fibrosis.

The parents of 10-year-old Sarah Murnaghan are fighting organ-donation rules that require adult lungs be offered first to adults, even those who are in less serious need than their daughter.

Sarah, who has only weeks to live, is eligible for adult donor lungs but, because of her age, she can only receive them after all adult candidates – regardless of the seriousness of their condition -- have the chance to receive them.

"We're starting to face the fact that, you know, she may not make it. And that we're sitting here with weeks," her mother, Janet Murnaghan, of Philadelphia, recently told Fox affiliate WTXF.

"I want to be famous and be on stage and sing and dance, and play my xylophone," Sarah told the station.

Now, Sebelius says she wants a review of the allocation policy and new approaches to promote pediatric and adolescent organ donation.

Pediatric lungs are rare, and the Murnaghan family thought their daughter would have a shot at a transplant when she made a list of adults. But they soon found a national organ rule standing in their way, according to the station.

The Murnaghans said they learned Sarah, who is being treated at Children's Hospital of Philadelphia, has to be at least 12 to compete with adults on the list, even if their cases aren't as dire. Sarah is a top priority on the pediatric list, but officials say there are far fewer pediatric donors due to improved treatment.

"The only thing standing between my daughter living and my daughter dying is the fact that she's 10 and not 12," Janet Murnaghan said. "That's unreal to me."

"Since we really have gotten to understand the rules of all of this in the last week or two, it's really driven us to speak out," Sarah's father, Fran Murnaghan told WTXF last week.

The nonprofit that manages the transplant system says any changes are unlikely to come soon enough to make a difference in Sarah's case.