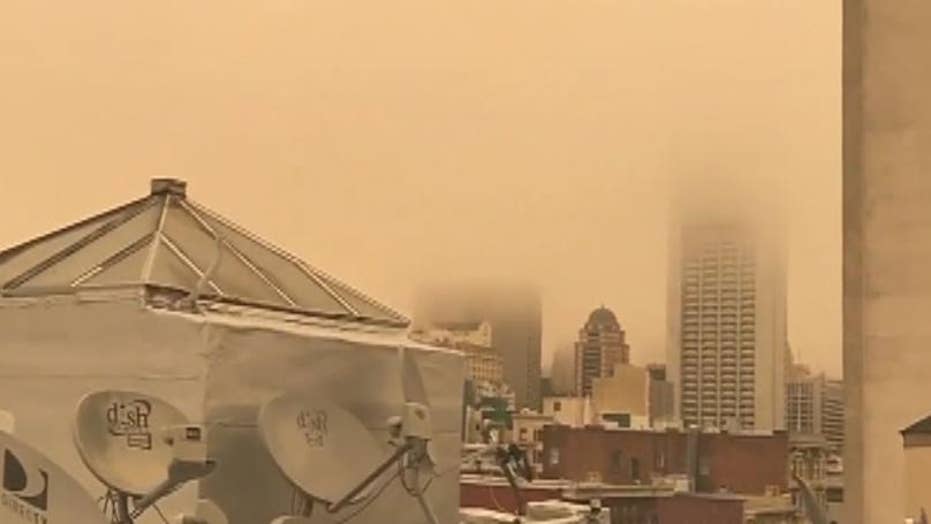 Air quality warning in San Francisco due to wildfire smoke

A wildfire burning out of control in rural Northern California sent a stream of smoke over 70 miles south into the San Francisco Bay Area on Sunday, transforming the sky into an eerie hazy mix of orange.

The County Fire in Yolo and Lake Counties has burned at least 50 square miles northwest of San Francisco, and is only 2 percent contained, according to the California Department of Forestry and Fire Protection. No injuries have been reported so far, but the blaze fueled by hot air and dry winds threatens more than 100 structures.

Smoke from the fire drifted south by Sunday, contributing to poor air quality across the Bay Area, according to San Francisco Department of Emergency Management. The agency said there was a "yellow" air quality alert due to the fires.

The orange shroud of fog and smoke over the city drew many to share photos on social media of the foreboding sky.

Ash from the fires even was reported falling by the famed Golden Gate Bridge.

Across the Golden Gate Bridge in Marin County, some customers coughed as they stopped for gas at the Shell station in Sausalito, employee Sergio Garcia told the Associated Press.

Officials urged people not to call 911 about smoke unless they see actively burning fire.