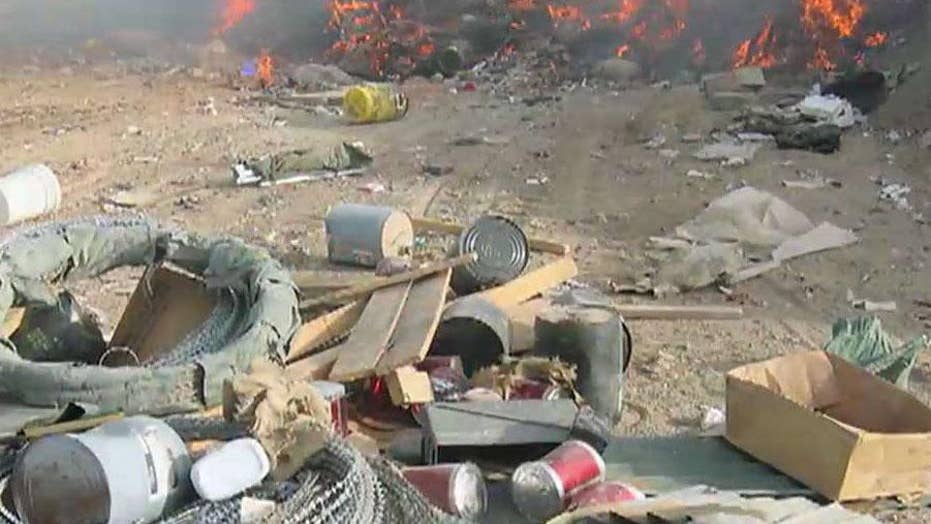 ,Brian Muller speaks out, believes his wife, Amie died as a result of exposure to burn pits.

It was in 2009 when Brian Muller first met his wife, Amie.

“We actually met at a music venue. And at the time I was playing music in a band and she had some friends there that were at the event,” Muller, 45, from Woodbury, Minn., recalls in a recent interview with Fox News. “Her friends forced her to go out. I forced myself to go out and just to see some music.”

He remembers how they discussed her service with the Minnesota Air National Guard.

“We ended up talking about what she does with the military,” he says, “and at that time, she was doing a project to make video memorials for gold star families. Families that lost loved ones in Iraq or Afghanistan or any type of war.”

“She asked me to write a song for those videos. And that's how we kind of started our relationship, as-- friends, and then it developed from there.”

Brian has never served in the military but was impressed by Amie’s service -- including her two tours in Iraq.

“She wanted to fly, and she joined the Air Force. And she got deployed and had her life kind of uprooted there for a while.”

Amie was stationed at Air Force Base Balad during both of her tours in 2005 and 2007 and while her active service was already behind her, the effects from her time on that base still lingered.

“She didn't really want to talk about her time over there,” Brian says. “Anytime a door would slam or a loud noise, she'd get startled very easily. She had a lot of PTSD [episodes] from just little things.”

Amie Muller served two tours of duty at AFB Balad in 2005 and 2007 where her husband Brian says she was exposed to the toxic smoke of nearby burn pits. (Courtesy of Brian Muller)

A decade after returning from Iraq, Amie’s physical health also suffered. She was diagnosed with Stage III Pancreatic Cancer.

“I still remember Amie getting the call, and she looked at me,” Muller says about the day they found out about her diagnosis back in April 2016.

“We walked around the corner just to make sure the kids didn't see. I could tell by the look in her face how scared she was. And I just kind of listening in to the call. And we just started shaking.

Both she and Brian believed it was related to her exposure to open-air burn pits used to destroy trash generated on the base. Nearly every U.S. military base in Iraq during the war used the crude method of burn pit disposal, but Balad was known for having one of the largest operations, burning nearly 150 tons of waste a day.

The smoke generated from these pits hung above Amie’s barracks daily.

“She talked about the burn pits even before she got cancer,” Muller recalls, “and how the fact that they would change the filters on these ventilation systems quite frequently. And every time they'd change it would just be this black soot, so thick that you would think you'd have to change it every hour.”

Nearly a decade after her return, Muller was diagnosed with stage III pancreatic cancer and died just nine months later.

As early as Operation Desert Storm in 1991, burn pits were used on U.S. military bases in Iraq. At the height of the Iraq War in 2005, more than 300,000 troops were stationed there and potentially exposed to the smoke and fumes from burn pits.

Thousands of veterans and former contractors returned from the Middle East and have developed rare cancers, respiratory problems, and blood disorders from what they claim are their exposure to toxins from the flaming pits. More than 140,000 active-service members and retirees have put their names on a Burn Pit Registry created by the Department of Veterans Affairs.

After Amie was diagnosed and her treatment began, she and her family went public with her story in the hopes that it would bring awareness to the dangers she and countless veterans faced after what they believe was a result of burn pit exposure.

Amie succumbed to her illness just nine months after she first diagnosed.

In her absence, Brian continued Amie’s work in raising awareness by sharing her story. He also worked closely with Sen. Amy Klobuchar, D-Minn., toward getting “The Helping Veterans Exposed To Burn Pits Act” -- a bipartisan bill recently presented in Washington and signed by President Trump – passed.

The bill will help fund a new center by the Department of Veterans Affairs that will study the effects of burn pit exposure and eventually assist with treatment plans. He also started the Amie Muller Foundation, which helps other veterans who were diagnosed with Pancreatic Cancer.

But recent findings show that the Pentagon was aware of the dangers of burn pits during the height of the war in Iraq.

Fox News recently obtained a series of memos drafted by top officials at AFB Balad during the same years that Amie served on the base. The authors of the documents -- which include commanding officers as well as environmental officials -- stated that the operation of burn pits was a danger to those stationed there and that precautions needed to be taken urgently to improve conditions.

“I don't understand why they didn't do something. These are people that volunteered to serve our country, and it just disgusts me to see memos like that, from high ranking officers that expressed this concern.”

“In my professional opinion, there is an acute health hazard for individuals,” reads a line from one memo written by a Bioenvironmental Engineering Flight Commander and the Chief of Aeromedical Services at Balad in 2006. “There is also the possibility for chronic health hazards associated with the smoke.”

The memo also includes an assessment of the pits in Balad where one environmental inspector said that Balad’s burn pit was “the worst environmental site I have personally visited.”

After inquiries by Fox News regarding the memos, Officials for the Department of Defense said that they would look into the matter and explained their procedural policy and that open-air burn pits are to be operated in a manner that prevents or minimizes risk.

“DOD does not dispose of covered waste in open-air burn pits during contingency operations except when the combatant commander determines there are no feasible alternative methods available,” reads the statement provided by a Defense Department spokeswoman. “DOD minimizes other solid waste disposal in open-air burn pits during contingency operations. Generally, open-air burn pits are a short-term solution.  For the longer term, we use incinerators, engineered landfills, or other accepted solid waste management practices whenever feasible.”

“I don't understand why they didn't do something,” he says after being shown a copy of the memos. “These are people that volunteered to serve our country, and it just disgusts me to see memos like that, from high ranking officers that expressed this concern.”

Muller adds that the underlying issue is a lack of accountability.

“The issue is they were doing something they shouldn't have done, that they constantly warned was an environmental hazard,” he says. “And our vets are getting sick. Our vets are dying.”

“You know, there was a fellow that did a video—‘Delay, Deny and Hope You Die.’ And that's kind of what's been going on. They're delaying this as long as possible so that they won't have to deal with as many claims, because most of them will die before they do anything about it.”

Muller also believes that Amie would have never fallen ill if it wasn’t for the fact that she was stationed at Balad.

“I don't think she would have gotten cancer. I really don't. Maybe she would have later in life. Maybe it would have been some other type of cancer. I don't know,” he says. “But something caused inflammation -- for something to grow in her body for a long period of time before it was ever seen and diagnosed. There was something going on with all of the vets when they got back.”

In a recent interview with Fox News, Gen. David Petraeus, the former commander of U.S. Central Command and Multi-National Force-Iraq in 2007, offered an explanation when asked about why burn pits were used on military bases, conceding that the realities of war kept concerns about how to dispose of waste a low priority at that time.

"At that time we weren't worried about burn pits,” The general said back in September. “We were worried about just getting enough water for our troops in the really hot summer. We were looking forward to the time where we might get some real food, real rations, as opposed to MREs and so forth."

The general also expressed that the U.S. has a commitment toward helping those veterans.

Muller believes the general’s recent comments to be a sign of a move in the right direction.

“When you start seeing men in uniform, or women in uniform, people higher up in the military starting to voice their concerns, you know we're making progress.”