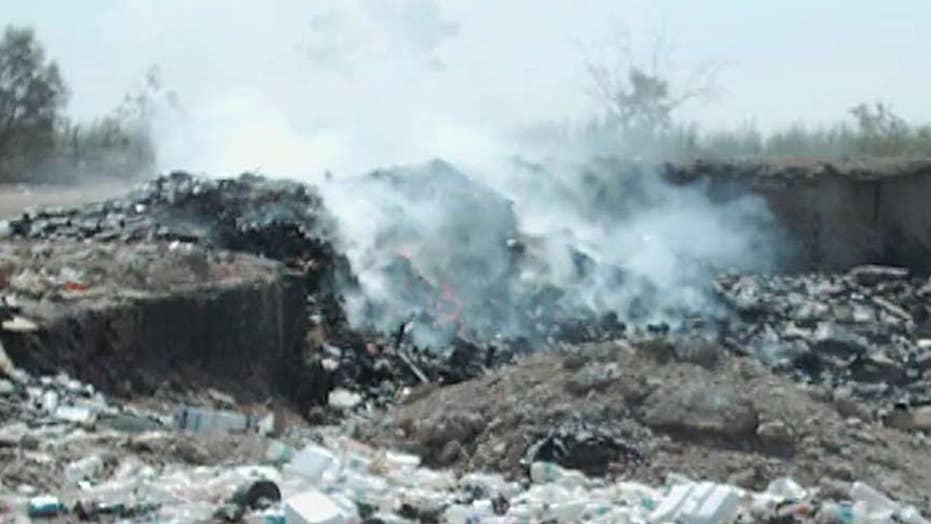 Tens of thousands of veterans believe their health has been compromised by the polluting smoke from burn pits on their bases.

EXCLUSIVE – Army Gen. David Petraeus, who was instrumental in guiding U.S. troops during the Iraq War, says that America’s service members should be receiving assistance for the mounting medical issues that they fear have come as a result of being exposed to burn pits while stationed at military bases.

Petraeus, the former commander of U.S. Central Command and Multi-National Force-Iraq, said it’s time for the service members exposed to the dangers of burn pits -- and who say they have been abandoned by the Veterans Affairs Department and Washington – to be provided with proper care.

“It's a sacred obligation,” Petraeus, a retired four-star general, told Fox News during an exclusive interview at his Manhattan office. “And by and large, our country does an extraordinary amount for our veterans and for those who are serving in uniform, and for their families.”

“But comparing what our VA does to any other country's care of veterans...this is the gold standard. Certainly, a gold standard that can always improve, without question. This is an issue, though, where we have a sacred obligation, and we need to meet that obligation.”

The haphazard method of getting rid of trash, chemicals and even medical waste -- in open-air burn pits -- during the wars in Iraq and Afghanistan generated numerous pollutants, including carbon monoxide and dioxin — the same chemical compound found in Agent Orange, the dangerous defoliant used during the Vietnam War from 1961 to 1971.

As early as Operation Desert Storm in 1991, burn pits were used on U.S. military bases in Iraq. At the height of the Iraq War in 2005, more than 300,000 troops were stationed there and potentially exposed to the smoke and fumes from burn pits. Estimates place the number of burn pits around that time at 63.

Thousands of veterans and former contractors returned from the Middle East and have developed cancer, respiratory problems and blood disorders from what they claim is their exposure to toxins from the flaming pits. More than 140,000 active-service members and retirees have put their names on a Burn Pit Registry created by the Veterans Administration.

Petraeus offered an explanation when asked about why burn pits were used on military bases, conceding that the realities of war kept concerns about how to dispose of waste a low priority at that time.

"At that time we weren't worried about burn pits. We were worried about just getting enough water for our troops in the really hot summer," he says. "We were looking forward to the time where we might get some real food, real rations, as opposed to MREs and so forth."

"This is an issue, though, where we have a sacred obligation, and we need to meet that obligation.”

The general explained how the rebuilding of Iraq’s infrastructure and the troop surge in 2007 were the high priorities at that time, but that the potential danger of burn pits was undeniable.

“They obviously fought us back. But over time, in that tour, in particular, you start noticing other issues,” Petraeus said. “So, yes, there is serious combat going on. But you’re noticing that there’s this massive burn pit that is up-wind of us. So it blows over this huge base, Camp Victory, where we had 25,000 or more soldiers based and stationed.”

“We had a number of other locations, again, where we had these burn pits. And you start to notice it more and more. And I got more and more concerned during that time -- I mean, it'd been something I'd noticed previously,” he said. “But now I realize that we've got all these soldiers who are, on really bad days, inhaling whatever it is that's being burned in these pits.”

Petraeus recalled during the sit-down that requests to install incinerators were made during the time of the surge and followed up when he moved to Central Command, but that it presented issues of its own.

“Well, it was something that had to be done for a long period of time,” he said of burn-pit disposal. “But at a certain point, it set in that perhaps there’s a better way of doing it.”

During the hour-long interview, General David Petraeus said that more needs to be done to help veterans who claim they have gotten sick from burn pit exposure. (Fox News)

“Incinerators were actually brought in in some cases. And then there were even problems just getting incinerators to work. Unfortunately, sometimes it was easier still just to put it in a hole and burn it.”

Petraeus points out that our troops during that time were at what he calls a “survival stage” and many options did not exist to dispose of the massive amounts of waste generated on our military operations.

“You have to do something with that. And now it's way beyond just human waste,” he says. “It's also all of the byproducts of just daily life. And a lot of that gets dumped into a hole in the ground, and gasoline, or whatever it is -- poured on it, and someone -- torches it. And it's the way of disposing of what otherwise can no longer be buried.”

The general conceded that this crude method had persisted for a long time and that as bases grew in certain areas, burn pits also grew significantly.

“The results of those, this enormous plume of black smoke and so forth was very, very noticeable,” Petraeus recalled. “[W]hen the wind was blowing and the burn pit was in operation at a number of these different bases.”

“Needless to say, you'd try to put it so the wind wouldn't blow it over there. But the winds vary. And they changed. And there was never any perfect method to that.”

Since 2013, Petraeus has been with global investment firm Kohlberg Kravis Roberts [KKR], where he serves as chair of their KKR Global Institute. He has also thrown his support behind efforts made in Washington to bring reform to the complicated process many veterans go through when they file a claim through the Veterans Administration.

General Petraeus also mentioned concern after seeing pictures taken earlier this summer at Camp Taji, Iraq, where burn pits were in use as recently as June. (Provided to Fox News)

“I know that you share the sense of obligation that virtually all Americans have to those who have stepped forward at a time of war,” he wrote in the open letter.

While steps toward reform are underway, there still is cause for concern for our troops who are currently in Iraq.

A recent report from Fox News shows that burn pits are still being used in at least one military base in Iraq.

In a series of images obtained exclusively by Fox News, a burn pit near Camp Taji, Iraq, is seen spewing thick clouds of black smoke into the air on a near-daily basis. According to one soldier stationed at the base, the pits are set ablaze as many as five times a week. The images were taken on and around June 3.

The pits, seen in the pictures originally provided, are situated in a part of Camp Taji known as an “amber zone” — an area adjacent to U.S. Military operations where Iraqi National Forces operate. The soldier told Fox News that while the unit’s part of the camp is not using burn pits for trash disposal, it’s not exactly clear where their trash ends up.

When asked about his thoughts on the burning still going on so close to where U.S. troops are stationed, General Petraeus expressed trepidation when seeing photos of the pits being operated in Taji’s amber zone.

“It's actually the Iraqis who are using those now. But that still is a concern for us. And it should be,” he says. “I think as time has gone by we have come to realize that this is a bigger issue than clearly it was in the earlier years of these two wars.”

“And with that awareness, obviously we can certainly do a better job.”