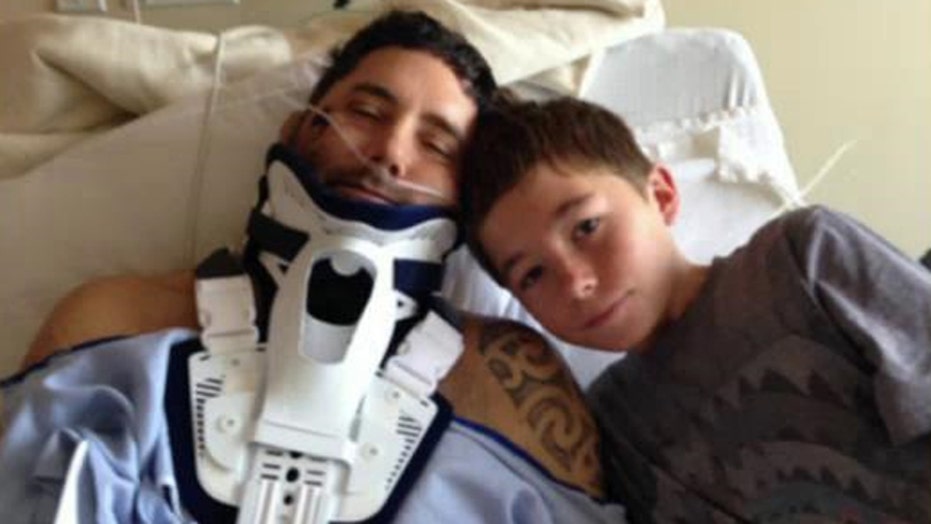 Boy Scout keeps dad alive after being struck by boulder

A 13-year-old boy faced a remarkable challenge in the remote Idaho wilderness when a boulder the size of a refrigerator fell on top of his father.

Charlie Finlayson confronted the dire situation without panicking, and using the lessons he learned in the Boy Scouts, rescued his seriously injured father, saving his life.

“He was my savior,” David Finlayson, 52, told the Idaho Statesman. “He just kind of coached me along with the pain and tried to help me not pass out. He kept talking to me all night.”

Finlayson feared bleeding to death after the boulder knocked him off a mountain ledge and broke his back, left arm and the heel of his left foot on Aug. 17. The two were on a father-and-son camping trip in the wilderness at Ship Island Lake near Challis.

For more than two days the boy assumed the role of caretaker. He kept his father hydrated, fed, calm and conscious. He used a backpack first-aid kit to dress his father’s wound.

"At first I was freaking out a little bit, but after a few minutes I kind of calmed down and thought I have to help him out and get his sleeping bag and stuff," Charlie told KTVB.

The 8th-grader told himself to be brave.

“You just gotta calm down and know that if you don't, it could make the situation worse," he said.

First, Charlie helped his father crawl for hours over boulder to their campsite. Then Charlie stayed with his father for two days until they agreed on the third day that the boy should try and find help.

After hiking for three hours, Charlie spotted two campers from his hometown in Eagle, Idaho. He gave them a note his father had written about what happened and where he could be found.

As they went to help his father, Charlie continued hiking and ran into more campers.

Eventually, a helicopter responded to the scene and transported Finlayson to a hospital. He has undergone two surgeries.