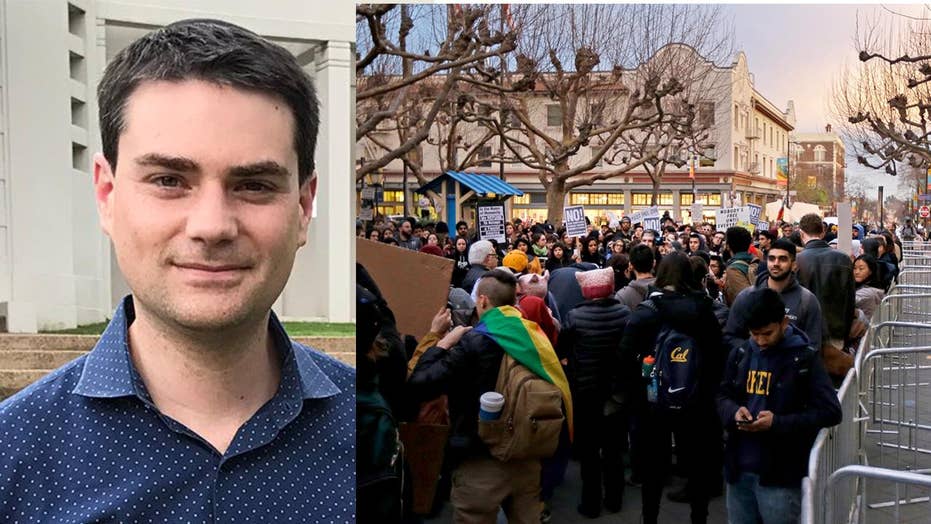 Ben Shapiro: Why UC Berkeley is ‘bracing’ for speech

A look at who Ben Shapiro is, why UC Berkeley is ‘bracing’ for his speech, and why the University has become a cultural battleground for the First Amendment

The University of California, Berkeley, is beefing up its security as it braces for conservative author and commentator Ben Shapiro to give a speech on campus.

Shapiro was invited to the Berkeley campus -- where a protest and sit-in in 1964 spawned the "Free Speech Movement " -- by conservative college students to give a speech titled “Say No to Campus Thuggery.” The 1,000-person venue is sold out, according to the university and event organizers.

Demonstrations are expected around UC Berkeley against Shapiro and his conservative viewpoints. And while it is certainly not the first time the political commentator has faced some contention, a spokesperson for the Young America’s Foundation (YAF), which is funding the lecture, said there has been “nothing like this” level of opposition in the past.

But despite the aversion, UC Berkeley Chancellor Carol T. Christ has defended Shapiro’s visit to campus.

“I believe very strongly in Ben Shapiro’s right to speak on campus. I don’t agree with Ben Shapiro. In fact, I profoundly disagree with him,” Christ told the Los Angeles Times about the controversy surrounding his invitation to the college. “But I believe he was legitimately invited by a student group and that he has the right to speak. It really is a troubling situation.”

Here’s a look at why Shapiro is considered by some to be so controversial.

Who is Ben Shapiro?

Shapiro, 33, is a conservative political commentator and editor-in-chief of the right-leaning news site The Daily Wire.

He is a graduate of the University of California, Los Angeles, and Harvard Law School, according to his biography.

In addition to the Daily Wire, Shapiro is also a conservative columnist, New York Times bestselling author and hosts his own podcast, “The Ben Shapiro Show.”

Shapiro was the editor-at-large at Breitbart, but resigned in March 2016 during the conflict between a Breitbart reporter and Corey Lewandowski, President Trump’s campaign manager at the time. Shapiro defended the reporter and accused Breitbart of “abandoning” his former colleague.

UC BERKELEY UNDER TIGHT SECURITY TO PREPARE FOR CONSERVATIVE SPEAKER

He also called Steve Bannon -- the executive director of the website who would eventually become the White House chief strategist for several months -- a “bully” who “sold out [Breitbart founder] Andrew’s mission in order to back another bully, Donald Trump.”

Shapiro revealed that he would “never vote for” Trump in March 2016 because he “stand[s] with certain principles.”

What are some of his works?

Shapiro is the author of several books, including “Primetime Propaganda: The True Hollywood Story of How the Left Took Over Your TV” and “Brainwashed: How Universities Indoctrinate America’s Youth.”

His 2013 book “Bullies: How the Left’s Culture of Fear and Intimidation Silences Americans” was a New York Times bestseller.

Additionally, Shapiro is outspoken about his opposition to the Boycott, Divestment and Sanctions (BDS) movements.

“Shapiro, an Orthodox Jew, has worked to expose the anti-Israel and anti-Semitic motivations behind the Boycott, Divestment and Sanctions movement,” his Daily Wire website states.

Shapiro also has been outspoken – and at times snarky – about his anti-abortion views, including in the cases of rape, and his support of small government, free speech and religious liberties.

So why is Shapiro considered by some to be ‘controversial?’

“Berkeley is not a school that doesn’t pay attention to facts. And Ben Shapiro is someone that directly spits in the face of facts,” Nason said.

Shapiro’s news website published videos earlier this week of protesters who called him the “founder” of “this fascist ideological regime.” The Daily Wire speculated the demonstrators were referring to the Trump administration, of which he has been largely critical.

Spencer Brown, YAF’s spokesman, pushed back on the notion that Shapiro is “controversial” and said the label comes from left-leaning people who apply it “to conservative speakers when they make their attempts to silence them.”

“In the case of Ben Shapiro, they label him as ‘controversial’ because of his effectiveness at attacking a few of the liberals’ favorite things: safe spaces, so-called microaggressions, intersectionality, etc.,” Brown told Fox News.

“Young America’s Foundation has worked to bring Ben Shapiro to more than 30 college campuses in the past few semesters, and so we’ve seen campuses pull out all the stops in attempts to block him from speaking or ensure that the event is limited in size or accessibility,” Brown said. “UC Berkeley’s attempts to block Ben from campus have failed because they met their match in YAF.”

"They label him as ‘controversial’ because of his effectiveness at attacking a few of the liberals’ favorite things: safe spaces, so-called microaggressions, intersectionality, etc."

Brown added that some people at Berkeley have called Shapiro a “white supremacist” – which he called “laughable.”

“Ben receives more hate from the alt-right than anyone else online these days,” Brown said.

Michael Burawoy, a sociology professor and chairman of the Berkeley Faculty Association, told the Associated Press that many are upset about the disruptions to campus speakers like Shapiro bring.

“There are faculty who don’t think the campus should be the site of this, what they call, political circus,” he said.

“We bring them on campus and allow them to speak and we encourage both right- and left-wing groups” to hold potentially violent protests, he said. “If we exclude them, they say Berkeley doesn’t believe in free speech. It’s a lose-lose situation.”

How is UC Berkeley preparing for the event?

Campus authorities said they plan to seal off the colleges’ central hub and create a “closed perimeter” where Shapiro is slated to speak as part of UC Berkeley’s efforts to “ensure the peaceful expression of free speech.”

The City of Berkeley announced Wednesday that it is prohibiting sticks, poles, pipes and “anything else that can be used for a ‘riot’” on Thursday at three of its parks. There are additional temporary rules imposed by the city that prohibit weapons on certain streets and sidewalks as well, the city said.

And for the first time in two decades, law enforcement officers have been authorized to use pepper spray in order to curtail violence during protests, according to the Associated Press.

Emotional counseling will be available to students who feel “threatened” by Shapiro’s appearance, UC Berkeley announced.

Bannon and right-wing provocateur Milo Yiannopoulos, also a former Breitbart editor, are expected to speak on campus during its “Free Speech Week” later this month.