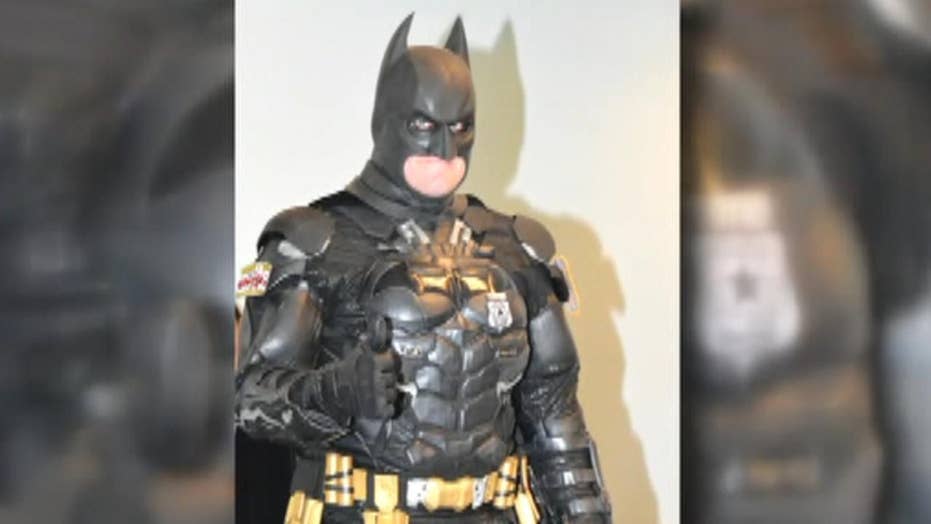 It was Batman to the rescue in Fort Worth, Texas.

Far away from Gotham City, a Fort Worth police officer dressed as the Dark Knight flew into a neighborhood Walmart after a man allegedly shoplifted four DVDs from the store. Among the movies he tried to take, according to police: Lego Batman.

Fort Worth Officer Damon Cole, who travels the country dressed as a superhero, was at a neighborhood safety fair for children. That’s when he heard about the alleged theft.

Instead of ignoring the call, he showed up to the Walmart to arrest the man – even though he was suited up in a Batman costume. The tricky part: Convincing store managers that he was an actual cop.

"Batman says 'I want you to know I have this Batman costume on but I'm an off-duty police officer," Anthony Drake, a Walmart community involvement member, told Fox 4 News.

The suspected shoplifter was issued a citation since the value of the DVDs was less than $100. But the suspect didn’t leave until he got a selfie with Batman.

“I want to get a selfie with you cause it’s not every day you get arrested by Batman,” Cole said the suspect told him, according to the news station. “So, he took a selfie.”

Cole, who has been an officer since 1999, travels the country dressed as a superhero, mostly to entertain terminally ill children. He says he uses his own money and travels on his own dime to help children forget their health issues.

“I want to inspire people,” he says on his webpage. “I want someone to look at me and say: ‘Because of you, I didn’t give up.’”

While Cole took the Fort Worth incident in stride, he was peeved about one thing – that the suspected shoplifter dared to try and steal a Batman flick.