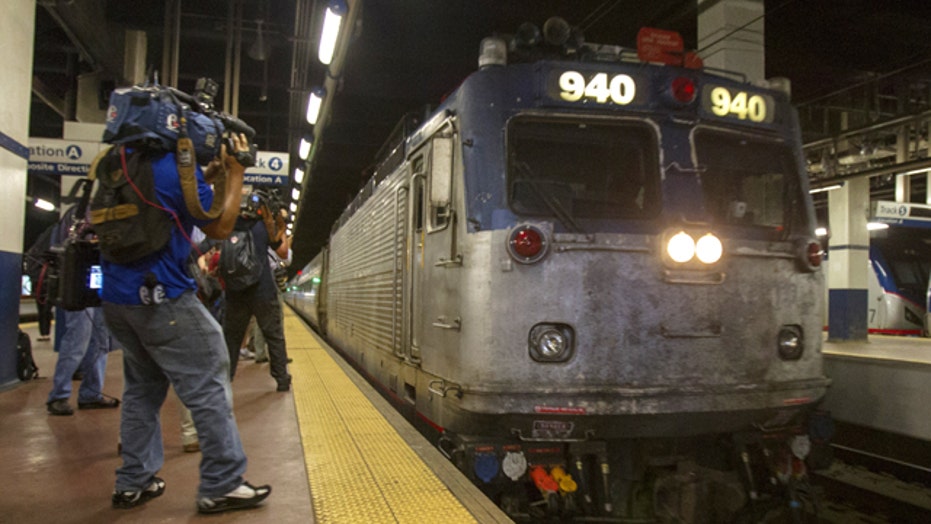 Investigators still working to determine cause of deadly crash

According to Reuters, the lawsuit against the U.S. rail service, filed in Philadelphia, appeared to be the first by non-employee passengers since the May 12 crash that killed eight and injured more than 200.

On Friday, an Amtrak employee filed the first lawsuit, asking for more than $150,000 in damages.

The passengers who filed the lawsuit include two cousins from Spain -- one of whom nearly lost an arm -- and a Brooklyn advertising executive who broke ribs, tore knee ligaments and lost teeth but staggered to help people before collapsing and being carried away on a gurney, lawyers said.

The news of the lawsuit came as Amtrak trains began rolling again between Philadelphia and New York early Monday, the first time since the derailment.

Amtrak resumed service with a 5:30 a.m. southbound train leaving New York City. The first northbound train, scheduled to leave Philadelphia at 5:53 a.m., was delayed and pulled out of 30th Street Station at 6:07 a.m. Both trains arrived at their destinations about 30 minutes behind schedule.

About 60 people boarded the New York-bound train in Philadelphia, including two dozen reporters and photographers. Philadelphia Mayor Michael Nutter was on hand to see the train off and hugged the first passenger in line, Mary Schaheen, of Philadelphia.

All Acela Express, Northeast Regional and other services also resumed.

Amtrak officials said Sunday that trains along the Northeast Corridor from Washington to Boston would return to service in "complete compliance" with federal safety orders following last week's deadly derailment.

Boardman said Sunday that Amtrak would be offering a "safer service."

In Philadelphia on Monday, Nutter stood on the platform, greeting passengers and crew members. He pulled out his cellphone and took pictures as the train rolled out.

"It's great to be back," said Christian Milton, of Philadelphia. "I've never had any real problems with Amtrak. I've been traveling it for over 10 years. There's one accident in 10 years. Something invariably is going to happen somewhere along the lines. I'm not worried about it."

Milton said he'd think about the victims and maybe say a prayer as the train navigated the curve where the derailment happened.

"My biggest takeaway was the under-promise and over-deliver, and the surprise of having it come back this morning when that wasn't expected," Carberry said. "That was a good thing for Amtrak."

At New York City's Penn Station early Monday, police with dogs flanked the escalator as a smattering of passengers showed their tickets to a broadly smiling Amtrak agent and headed down to the platform.

A sign outside the train flashed "All Aboard" in red letters.

The conductor gave a broad all-clear wave, stepped inside and the train glided out of the station.

Amtrak spokesman Craig Schultz said it was important to restore service, calling the Northeast Corridor "an economic engine here on the East Coast."

Almost 20 people injured in the train crash remain in hospitals, five in critical condition. All are expected to survive.

Sen. Bill Nelson, D-Fla., introduced legislation Monday that would increase the cap on damages Amtrak could be forced to pay from lawsuits, raising the limit to $500 million from $200 million.

Amtrak has said it does not comment on lawsuits.

Investigators with the National Transportation Safety Board have focused on the acceleration of the train as it approached the curve, finally reaching 106 mph as it entered the 50 mph stretch north of central Philadelphia and only managing to slow down slightly before the crash.

The Amtrak engineer, who was among those injured in the crash, has told authorities he doesn't recall anything in the few minutes before it happened. Characterizing engineer Brandon Bostian as extremely safety conscious, a close friend said he believed reports of something striking the windshield were proof that the crash was "not his fault."

"He's the one you'd want to be your engineer. There's none safer," James Weir of Burlison, Tenn., told The Associated Press in a telephone interview Sunday.

Investigators also have been looking into reports that the windshield of the train may have been struck by some sort of object, but NTSB member Robert Sumwalt said on CBS' "Face the Nation" program Sunday that he wanted to "downplay" the idea that damage to the windshield might have come from someone firing a shot at the train.

"I've seen the fracture pattern; it looks like something about the size of a grapefruit, if you will, and it did not even penetrate the entire windshield," Sumwalt said.

Officials said an assistant conductor on the derailed train reported hearing the Amtrak engineer talking with a regional train engineer and both said their trains had been hit by objects. But Sumwalt said the regional train engineer recalls no such conversation, and investigators had listened to the dispatch tape and heard no communications from the Amtrak engineer to the dispatch center to say that something had struck the train.