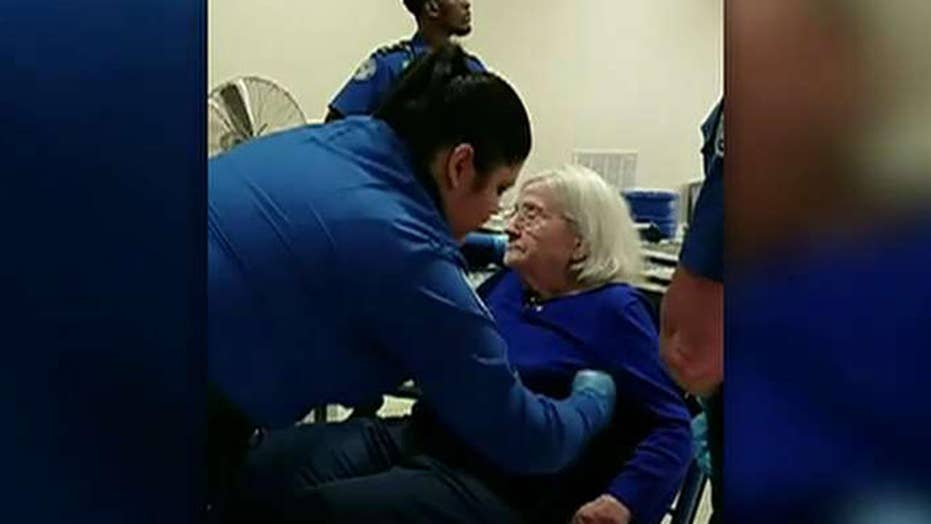 The 96-year-old endured a six minute pat down.

Many are livid over a now-viral video of Transportation Security Administration (TSA) officials patting down a 96-year-old woman in a wheelchair at Washington Dulles International Airport in a six-minute screening being described as “totally disgusting” and “uncalled for” on Facebook.

On May 15, Jeanne LaBrier Clarkson shared the six-minute clip to the social network of her nonagenarian mother, Evelyn LaBrier, being screened in her wheelchair by two female TSA security agents at the Virginia airport. Clarkson, LaBrier and Clarkson’s fiancé were traveling home to Anderson, Indiana after visiting Clarkson's son in Maryland, CBS News reports.

“The 3 of us were all in wheelchairs. Only my 96 year old mother was subjected to this prolonged, repetitive search,” Clarkson captioned the clip, which has since been viewed nearly 9 million times and has sparked heated debate.

In the footage, the two TSA staffers politely explain the search to LaBrier as they screen her, asking her to remove her windbreaker before giving her a full pat down from her hair to her sneakers, asking her to redistribute her weight at one point so that an officer can inspect underneath her.

"What the hell do you think she's going to do? Set off a shoe bomb?" Clarkson can be heard exclaiming in the background of the encounter, which has left her furious.

“I am my mother’s legal guardian and responsible for her well-being. I went through security. When I saw that they had pulled Mother aside to search her. I tried asking why. They ignored me,” Clarkson recalled, the Washington Post reports. “That upset me so I began videoing what they were doing to document my complaint that I intended to file.”

“I have traveled extensively and never seen anything like this. Mother had traveled with me before and never been groped like that!” she added.

Though LaBrier successfully passed the screening, the incident has drawn mixed reactions from commentators on Facebook as to why it had to happen in the first place.

Critics have described the TSA’s search of LaBrier as "totally disgusting," "horrible", "unbelievable" and “uncalled for,” while supporters of the search say that the agents were simply following policy.

“No offense to anyone but people use the elderly to smuggle stuff and just because you say your in a wheelchair doesn't make you not able to smuggle stuff that is illegal,” one detractor clapped.

“The woman is merely doing her job. Is it both annoying and inconvenient? Absolutely but she did nothing wrong. She was gentle and respectful. She even talked her through each step of the process. I'm sure she felt badly about having to do it,” another agreed.

Soon after, the airport took to Facebook to clarify that it was the TSA’s decision alone to screen the 96-year-old ahead of her flight.

“Many of you have reached out to us to express concern over a video of a security screening taking place at Dulles International Airport. Security screening at our checkpoints is directed and conducted by the TSA,” they posted. “We have shared customer comments with the TSA for their immediate review and appropriate action.”

The TSA returned Fox News’ request for comment with the following statement on the story:

"TSA is committed to ensuring the security of travelers, while treating all passengers with dignity and respect. In this instance, the TSA officer provided advisements during the pat-down and was extremely polite. The passenger was very cooperative and gave no indication that she was agitated or in discomfort. She received a pat-down and was cleared for her flight,” a representative said.

As for the LaBrier family, their United flight was unfortunately canceled due to weather. With no hotels available, the party of three was forced to spend the night at the airport, Clarkson wrote on Facebook.

“Pat-down procedures are used to determine whether prohibited items or other threats to transportation security are concealed on the person. You may be required to undergo a pat-down procedure if the screening technology alarms, as part of unpredictable security measures, for enhanced screening, or as an alternative to other types of screening, such as advanced imaging technology screening” the TSA’s web page on security screenings states. “Even passengers who normally receive expedited screening may at times receive a pat-down.”