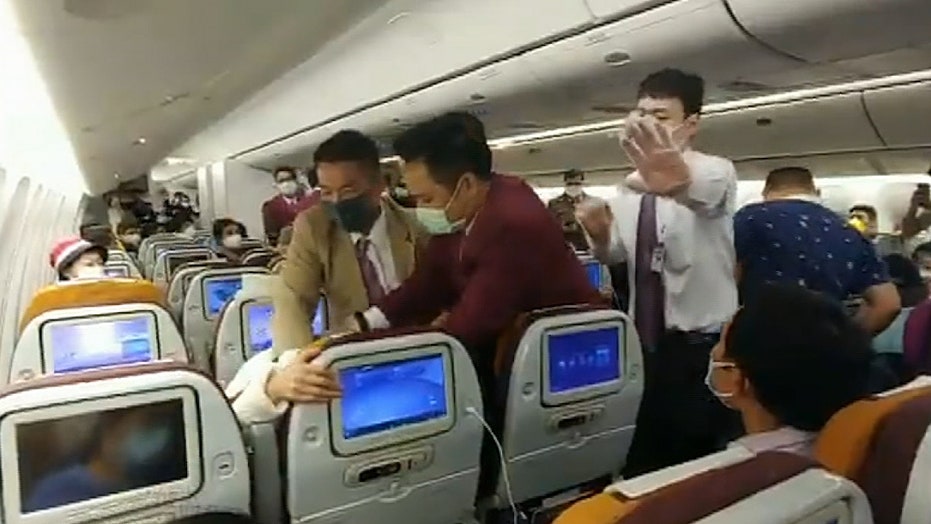 A Thai Airways passenger was reportedly restrained after intentionally coughing on a crew member during a delay. The flight had landed at the Shanghai Pudong Airport Friday when those on board were held for more than seven hours on the plane.

A woman was restrained by flight crew on a Thai Airways plane after she became upset by a delay and intentionally coughed on a flight attendant while waiting to deplane.

The flight had landed at the Shanghai Pudong Airport from Bangkok on Friday, and passengers were held for more than seven hours on the plane while waiting to undergo coronavirus health screenings, reports said.

The unidentified Chinese woman allegedly became so enraged by the delay that she began flailing her arms and deliberately coughed on a flight attendant.

According to video taken of the alleged incident, the woman can be seen in a headlock while a male crew member calls to another to help him “put her down,” the New York Post reported. Three crew members come to his aid and they are able to restrain the woman.

A spokesperson for Thai Airways did not respond to a request for comment but said in a statement to the New York Post that the woman was “upset about being held for a long time.”

”We could not open the doors of the plane until instructed to and health officials came to proceed with checks. Therefore, Thai Airways had to wait for seven hours before officials arrived at the inspection queue,” Prathana Pattanasiri, head of Thailand’s Aviation Safety Department, said.

“The Chinese passenger was upset about being held for a long time and coughed at one of our staff. After she calmed down, we explained the situation to her and she agreed to sit and wait for screening.”

The airline was informed of the screening procedures prior to landing, Pattanasiri said.