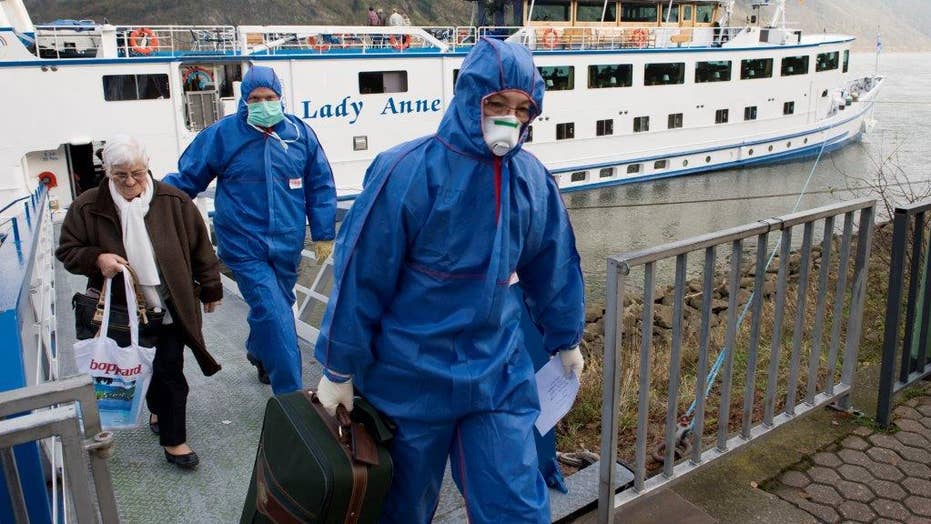 Why are cruise ships such hotbeds for the norovirus?

Catching the norovirus has become a common trend on cruise ships, but why are the vacation boats such hotbeds for the stomach virus?

A Royal Caribbean cruise ship docked in San Diego Thursday morning with 24 sick people who reported symptoms of a gastrointestinal illness on board.

The Azamara Quest arrived in port around 5:30 a.m. with 22 passengers and two crew members who had been ill with what’s believed to be norovirus while sailing from Costa Rica to San Diego for 15 days, the San Diego Tribune reports.

FOOTAGE CAPTURES ICE CHUNK FALLING FROM SKY, ALMOST SMASHING INTO PEDESTRIANS: ‘IT WAS THE SIZE OF A BOULDER’

Only four people on board showed symptoms within the last 48 hours before arriving in San Diego, but the other passengers and crew had reportedly recovered, Royal Caribbean spokesman Owen Torres said in a statement to Fox News.

"All other guests have recovered and were treated by our ship’s doctors and responded well with over-the-counter medication," Torres said.

According to the Centers for Disease Control, crew collected stool samples from those who were sick and increased cleaning and disinfection measures. There were 663 passengers and 458 crew members on board in total.

“We encouraged our guests and crew to wash their hands often, which health experts recommend as the best defense against stomach viruses, which each year affect as many as 300 million people worldwide—only the common cold is more prevalent,” Torres said.

Crew members “planned and executed comprehensive sanitation procedures” and performed a “full barrier sanitation cleaning” of the ship before it departed for its next cruise later on Thursday.

Gastrointestinal bugs seem to be fairly commonplace on cruise lines. Just last month, 47 Royal Caribbean passengers aboard The Grandeur of the Seas got sick on a cruise heading for the Bahamas.

Additionally, Princess Cruises is facing an impending class-action lawsuit after thousands of passengers claimed they caught norovirus while traveling on the cruise line.