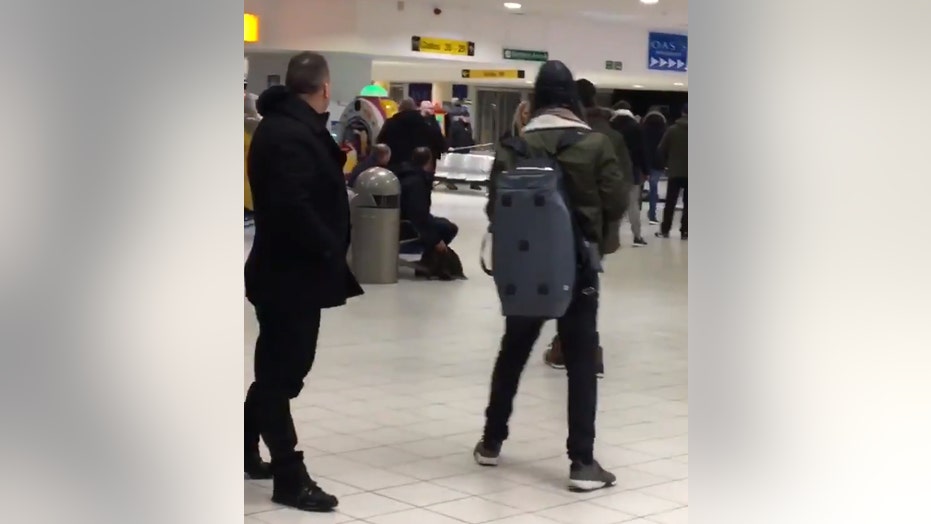 A violent brawl between two groups of passengers at Belfast International Airport in Northern Ireland was caught on video and shared on social media over the weekend.

A violent brawl between two groups of passengers at Belfast International Airport in Northern Ireland was caught on video and shared on social media over the weekend.

The fight, which took place Saturday, reportedly happened while the men were waiting for their flights.

In the video, the men are seen using various objects found around the departures terminal as weapons. The group used wire baskets from a nearby duty free shop, as well as metal poles to throw and hit each other with. One witness said the men were throwing fire extinguishers as well.

"They were also hitting each other with poles that hold up advertisements in bars. No idea what started the fight,” the unnamed witness told Mirror Online. "It took around 20 minutes for the police to arrive."

Another witness said the men grabbed mops and “were pretending the mops were guns.”

In the now-viral video, women are seen moving farther away from the violence as the fight escalates. Children were reportedly screaming and crying.

It is not known what started the altercation, but a witness told Mirror Online that the fight began inside an airport bar called the Lagan Bar.

The groups of men managed to calm down when police arrived.

The police reportedly separated the men and allowed them to board their respective flights.

A spokeswoman from Belfast International Airport confirmed the incident to Belfast Live, stating “an altercation between two groups of passengers occurred this evening in the airside departures area. Police were in attendance and the incident has since been resolved.”

It was not reported how much damage was caused by the fight.