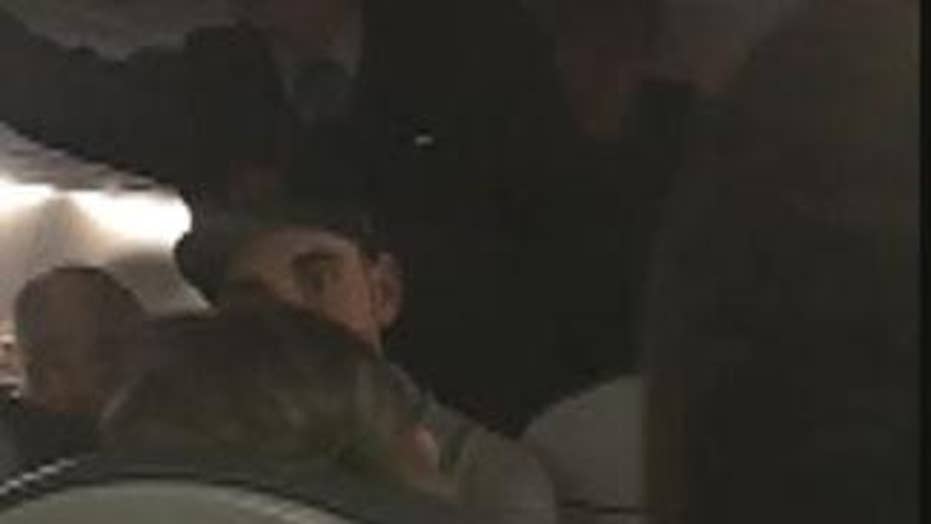 A passenger on a flight from Houston to Cincinnati has a seizure during duration of flight.

A passenger on a United Express flight from Houston to Cincinnati is hailing another passenger as a hero — and criticizing the crew for not cutting the flight short — after another flyer suffered seizures shortly after the plane took off Sunday.

Amy Hammond, of Mason, Ohio, wrote in a Facebook post that the unidentified woman was traveling with her young son when she passed out as the plane was ascending.

"The HERO in front of her, hopped back and started yelling for a doctor," Hammond wrote. "No one came. Do we turn around? No!" She added that the woman regained consciousness before suffering the first of a series of seizures.

"She had seizures and passed out the entire flight — dozens of times — from take off till landing!" Hammond claimed. "Over 2 hours!" She also claimed that the woman's "hero" continuously worked to revive her "while drinks were carried over him in the aisle."

In a video accompanying Hammond's post, the woman's head could be seen moving from side-to-side while a voice over the loudspeaker announced the plane would land in approximately 30 minutes.

By the time the plane landed, Hammond wrote, the woman "did not know who the president was or the month or day of the week."

As she left the plane, Hammond said she confronted the pilot about why the plane kept going despite the apparent emergency.

"The pilot said he made the decision," Hammond wrote. "I told him we had to watch a young mom convulse and pass out over and over for 2 hours!"

Republic Airlines operated the flight under the United Express name.

PASSENGER WHO GAVE UP FIRST-CLASS SEAT FOR MOM, BABY SPEAKS OUT: 'I WAS TEARING UP'

"The safety of our customers is our first and highest priority," Republic Airlines spokesman Jon Austin told Fox News in an email. "The decision to continue to the flight’s destination was made by our crew who did the right thing by working with medical personnel onboard, with our on-call medical service provider and with input from the passenger. Had it been the judgment of the medical professionals that another course of action was indicated, we would have followed that recommendation immediately.

"We're grateful to all of our passengers who assisted in responding to their fellow passenger’s situation, including the numerous medical professionals on board who volunteered their services when asked."