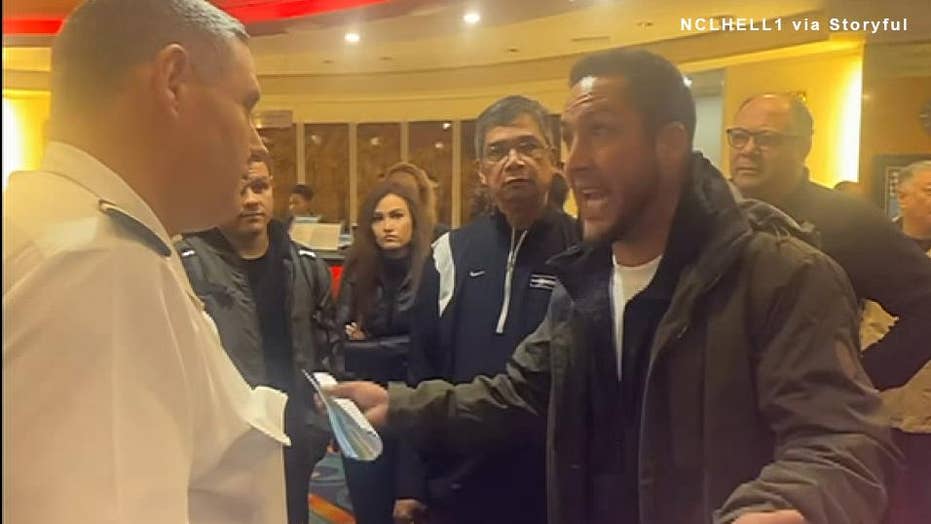 Large groups of fed-up cruise passengers were recently filmed berating the staff of the Norwegian Spirit after the liner was reportedly forced to miss multiple stops during its 14-day excursion to Iceland.

Fed-up cruise passengers were recently filmed berating the staff of a Norwegian Cruise Line ship after it was reportedly forced to miss multiple stops during its 14-day excursion to Iceland.

The Norwegian Spirit, which departed Southampton, England on Sept. 27, failed to make scheduled stops at ports in the Netherlands, France, Iceland and finally Scotland, with Norwegian blaming the "severe weather conditions."

Footage shared on social media by passengers also appears to show the toilets not flushing or being sealed off after days adrift at sea.

“I do not know how many of the toilets on the ship failed, but when [I] got up and walked around the ship yesterday it smelled like sewage in public areas on the ship,” one passenger wrote on Twitter. “Passengers reported bathrooms not working or backing up on multiple decks and our toilet failed.”

A passenger who spoke with the BBC alleged that the food on the ship was starting to go bad, as well.

"There was just an outrage, a roar, from all the people ready to get off the ship,” said Katasha Jones of the passengers' reaction upon being told there would be no stop in Greenock, Scotland.

Other images and footage from inside the ship show passengers demanding refunds or loudly arguing with staff members. Many of these pictures and video are also being shared through a Twitter account called NCLHELL, which contains an account description reading, “Traveled Norwegian Spirit 14 days to Hell Sept. 2019.”

Norwegian has apologized for the change to the ship's itinerary, which they blamed on weather conditions, in a statement obtained by the BBC.

"We always do our best to provide our guests with a truly enjoyable and memorable vacation, but our very first priority is to ensure their safety and the safety of our crew," a spokesperson said in a statement obtained by Fox News.

The cruise line also claimed that eight of the nine ports of call would ultimately be visited, and that the company would appreciate passengers’ “patience, cooperation and understanding” as "an act of God and cannot be controlled, influenced or remediated by the cruise line."

According to a letter provided to passengers from Norwegian, and later confirmed by the cruise line to Fox News, the company offered the affected passengers a 25 percent credit toward a future sailing — although not everyone was pleased with the offering.

“NCL ruins holiday and offers passengers 25 percent off our next cruise after the captain is booed out of the lobby,” the Twitter post reads.

According to its itinerary, the Norwegian Spirit is due back in Southampton on Oct. 11