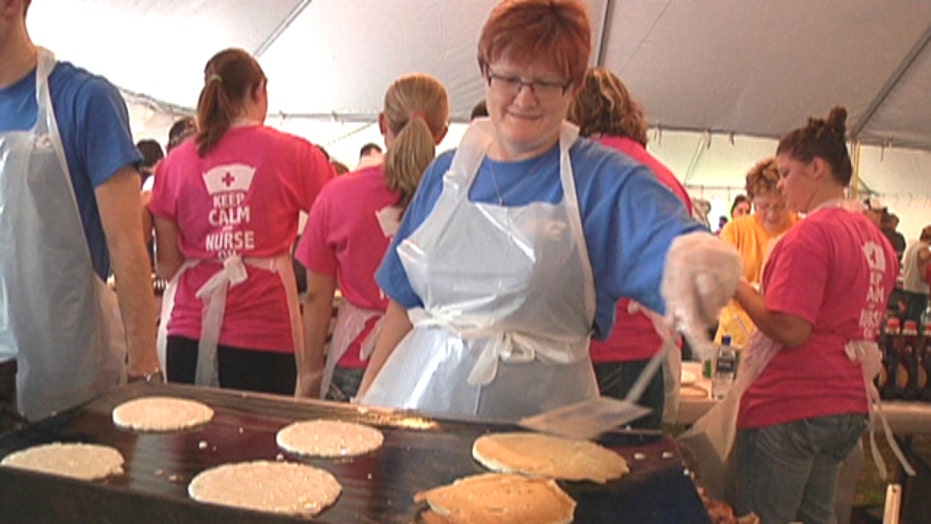 Centerville, IA – One small town in Iowa has their own economic stimulus plan to bring business back downtown. And it’s pretty tasty.

Centerville is home to the 65th annual Pancake Day, celebrated last weekend with a day-long festival of pancakes, parades, music, and games.

Joyce Bieber, executive director of the Centerville Chamber of Commerce, said that over time the town --which used to house a Pillsbury plant-- has had to change what draws people to its square.

“Centerville has had to reinvent itself. Tourism is our new identity. And Pancake Day kind of fits in with that,” said Bieber.

In fact, Centerville’s population of 5,464 residents more than quadruples during the festival. It serves as a homecoming for area residents and attracts out-of-towners.

“It’s like Christmas. It’s the biggest day of the year in Centerville,” said Bieber.

For shop owners, this means a lot of foot traffic around the town square.

The hotcakes tradition started back in 1949 when Centerville was home to a Pillsbury plant. The company would donate the pancake mix for the event as a way to say “thank you” to the town residents. Although Pillsbury is long gone from the area, years later the free pancakes are still a big attraction.

Penny Sharp, manager for Morgans Ice Cream Parlor and Candy Confectionery, said that they were getting ready all week for the crowds.

“This is our first week in business, and Pancake Day is a really big day for us. We opened early so we could be prepared,” said Sharp.

And for many businesses and residents, flipping pancakes has become a family affair. Six-year old Ethan Vinzant helped his dad mix pancakes all morning at the festival. He learned from the best, his family has been mixing the batter at Pancake Festival for over 50 years.

The real griddle masters say that they’re now flipping about 30,000 flapjacks at the festival. And some of those pancakes are flipped by town royalty. Shelby Royer, the Pancake Queen of 2012, said that the day was a great chance for the town to show off the square.

“Pancakes, entertainment all day, the big parade. It’s just a nice get together for the whole community and out of town people come just to have a celebration with their family,” said Royer.