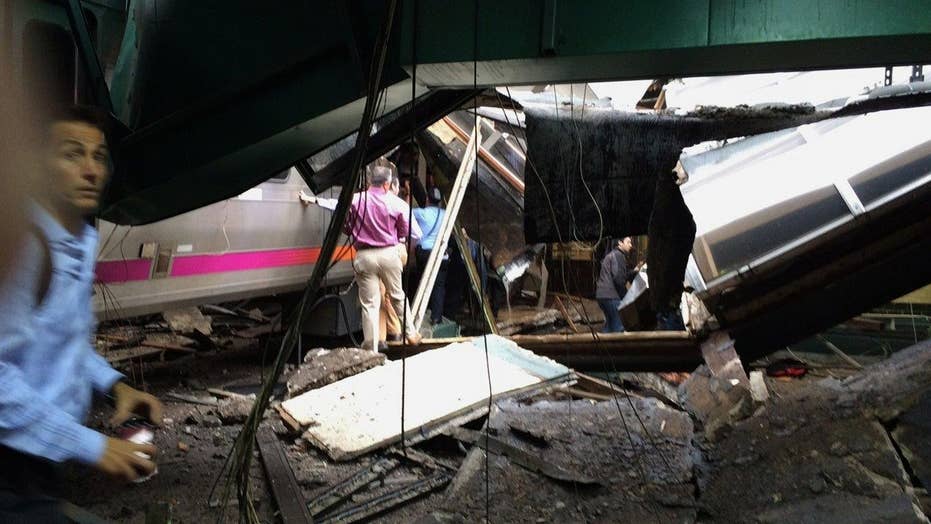 The New Jersey transit train that barreled into the station killing one person and injuring over a hundred people was a reminder of a similar rail incident where a train rammed into the bumping post at the same Hoboken terminal injuring 30 people only five years ago.

Josh Crandall of the public transit information site CleverCommute.com says that despite several high profile incidents over the years, not much has been done to improve safety-- or ease traveler concerns.

The National Transportation Safety Board (NTSB) determined that the 2011 crash was caused by, “…the failure of the engineer to control the speed of the train entering the station. Contributing to the accident was the lack of a positive train control system that would have intervened to stop the train and prevent the collision.”

Though Gov. Chris Christie says we don’t know what happened yet, we do know that "the train came in at much too high of a speed.”

Knowing the train did not show signs of braking has renewed the conversation on automatic breaking systems-- also known as PTC, Positive Train Control System. The NTSB has pushed for the use of positive train control on all rail systems and it’s been on the board’s “most wanted” list of safety precautions for over twenty years. The Association of American Railroads says PTC technology is designed to automatically stop a train before certain accidents are caused by human error.

But according to New Jersey Transit’s last quarterly filing from July 2016, none of the company’s 400 plus locomotives were equipped with PTC software, nor was any track. The Rail Safety Improvement Act of 2008 originally mandated that PTC be installed in all freight and passenger trains by 2015 but an extension was issued until 2018 so that all railways could appropriately test their systems.

In reaction to the Thursday’s accident, House Minority Leader Nancy Pelosi (D-CA) showed her frustration with Congress saying, “I don't think we should have extended the deadline. If you extend the deadline, stop the trains.”

A safety measure that can reduce fatal train crashes like the one in Hoboken seems to be an no brainer, but experts say a lack of funding has kept transit systems from adopting the technology. According to Politico, the Northeast corridor (Amtrak's busiest network) "only has this technology installed in three short sections.”

“Operators would have to put money into new equipment — a move that anyone with millions invested in existing technology might hesitate to make,” according to BusinessInsider.

"A lot of projects for bridges and other infrastructure were recently stopped. If it’s possible to automate to cars, why is there not a discussion to automate trains?" Noland told FoxNews.com. "There are automated subways and such. It’s a matter of getting the money.”

If money is what slows the progress of safety mechanisms being installed then Amtrak’s most recent $7 billion request from the government for railroad funding should help.

Amtrak CEO Joe Boardman, who retired in September, spoke to TheHill.com and admitted that the dated rail system needs work.

“If you're just looking at the Northeast Corridor - and if you're really just thinking about the infrastructure - it's getting to be 100 years old, whether it's tunnels or whether it's some of our bridges."

But, Boardman continued, new funding could turn it around. "We're seeing very positive opportunities to make real improvement and real investment for the future in the specific infrastructure of the Northeast Corridor.”

Wendell Cox, a former member of the Los Angeles County Transportation Commission and editor of Demographia.com says safety needs to become a priority or the rail systems will fail.

Cox says, “People will not ride if it’s not safe and although we don’t know what happened yesterday, we shouldn’t be killing people on our railroads. There is no more important thing as safety.”