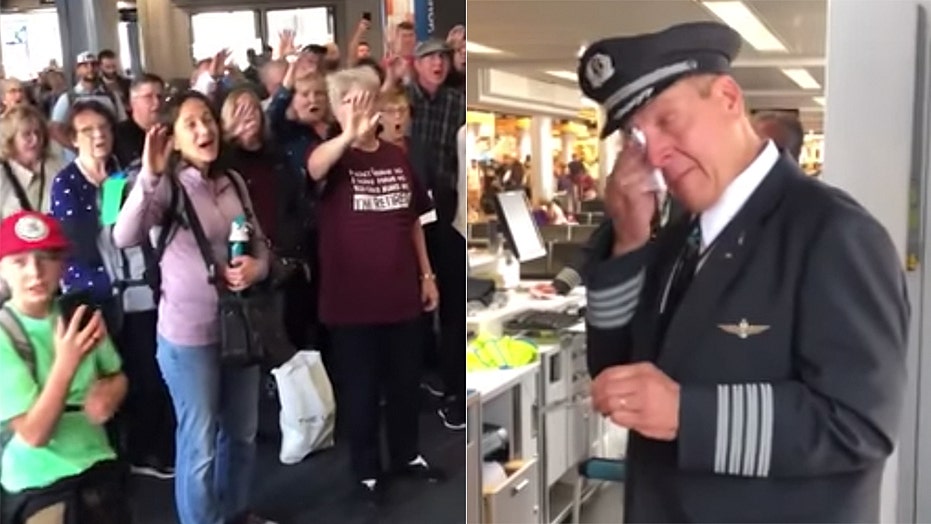 There wasn't a dry eye outside gate K5 at Chicago O'Hare airport when an American Airlines pilot was surprised after his retirement flight from Dublin, Ireland with an Irish blessing.

American Airlines Capt. Brian Lenzen took off his glasses and wiped tears from his eyes as members of the St. Anthony on the Lake choir sang their rendition of the Irish Blessing "May the Road Rise Up" in a video posted by the airline in mid-July.

"It was just a very special moment," Lenzen, a native of Chaska, Minn., told KARE11. "I’m kind of an emotional guy anyway, and so I got a little tearful realizing that was for me."

For Lenzen, being a pilot was a dream job. But at 65, it was a mandatory retirement and he decided to make his last flight to Dublin and celebrate at a pub with a hand-picked crew.

The choir, which was returning from a tour of Ireland, was asked by the flight attendants to sing to the pilot after he exited the plane for the last time as a pilot.

"We waited at the end of the tunnel, and we sang to him when he came off the plane," Laurie Polkus, who directed the choir, said on Facebook. "He announced in the flight that it would be his last and walked through the cabin saying goodbye. His wife was on the flight...it was lovely and very emotional."

The group could be heard singing outside the O'Hare gate: "and until we meet again, may God hold you in the palm of His hand."

The choir called it a "fitting tribute" to the pilot, who has been with American Airlines with 34 years, and the crew said they were "touched."

As Polkus concluded online: "God put us where we were needed!"