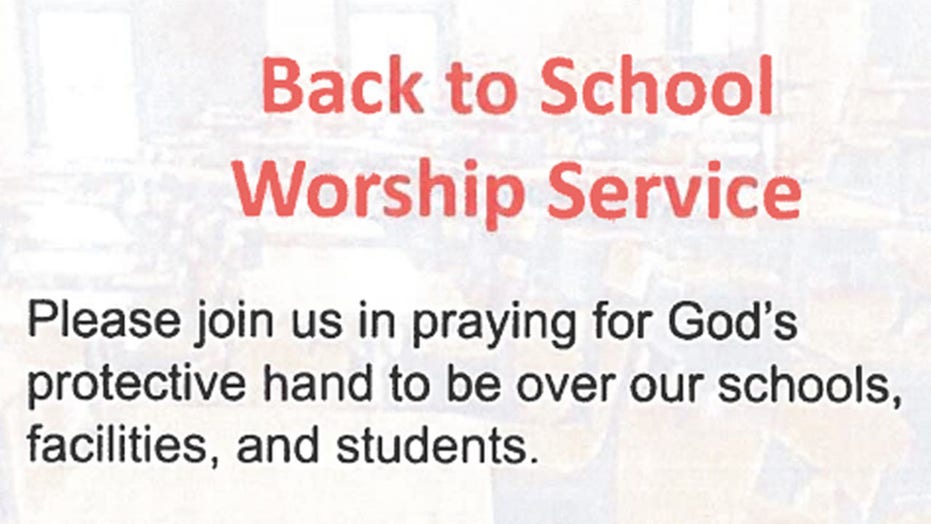 In the wake of the shootings in El Paso, Texas and Dayton, Ohio over the weekend, an Alabama high school held a back-to-school worship service in its gym "praying for God's protective hand" over school children and the nation, despite being targeted by the Freedom From Religion Foundation, which accused the school board of violating the constitution.

“I do not believe we broke the law in having this event on the Fyffe High School campus," DeKalb County Schools Superintendent Jason Barnett told Fox News.

Hundreds gathered at Fyffe High School in Dekalb County Sunday to pray for safety and protection as part of an annual "Back to School Worship Service" that has been held for the last five years or so. The FFRF called the event a clear violation of church and state.

“DeKalb County Schools must make certain that its teachers and administrators are not unlawfully and inappropriately indoctrinating students in religious matters,” the letter demanding an investigation said.

FFRF said a "concerned DeKalb County Schools parent" reported the event was being organized and promoted by school faculty members and promoted on the school's official Facebook page, which has since been taken down: "Please join us in praying for God's protective hand to be over our schools, facilities, and students."

But Barnett said the event was organized by community members not affiliated with the high school and approved by the school board, much like other events.

"To my knowledge, no administrators or faculty members were involved in the organization and planning of the event. I want to add that the board did not promote this event, but rather permitted an announcement of the event on the school Facebook page just as it permits others to provide information about community events," Barnett noted. "The 'us' in the Facebook announcement refers to the organizers of the event, not the school or the school board.”

Because of the attention from the FFRF complaint, the small prayer gathering had over 350 community members in attendance, a sizable increase from previous years, according to the local news.

In addition to praying for the schoolchildren, pastors and faith leaders prayed for those involved in the weekend's mass shootings.

"Its a scary world, that's why we are praying for God's protection over our schools," Jon Mayes, Guest Baptist Church pastor and parent, told WAAY TV.

Barnett said the school district has taken steps in the past few years to maintain safety for its students and has made it a major focus.