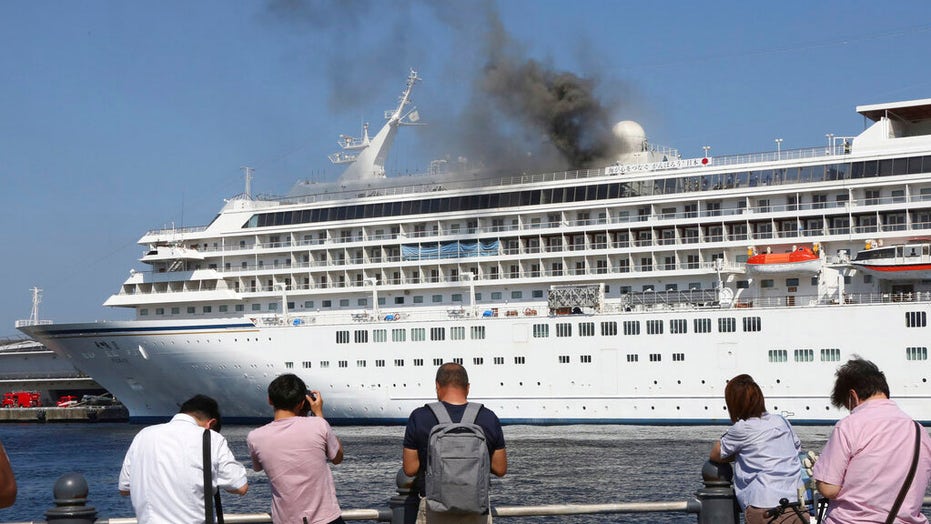 A fire broke out on one of Japan’s largest cruise ships on Tuesday, though the cause of the blaze has yet to be determined.

The Asuka II, which was docked in Yokohama with 153 crew members onboard, requested the assistance of the local coast guard at around 1 p.m., at which time crew members were already attempting to battle the blaze themselves, Kyodo News reported. The local fire department joined the efforts to eventually extinguish the fire about four hours later, according to a timeline provided by the ship's operators.

AT LEAST 42,000 CRUISE SHIP WORKERS ARE STILL AT SEA: REPORT

No one was injured, the coast guard confirmed.

Firefighters are seen battling the fire as black smoke rises from the Asuka II docked at Yokohama Port, near Tokyo. (AP Photo/Koji Sasahara)

The parent company of NYK Lines, which operates the Asuka II, had later said the fire broke out in a storage room located on the top deck of the ship. The exact cause of the fire is still under investigation, NYK confirmed in a press release.

“We apologize for any inconvenience caused to people living in the neighborhood or related organizations,” reads a message posted to the official website of the Asuka II.  We would also like to thank the Yokohama City Fire Bureau and the Coast Guard Headquarters of the Third Division for their rapid fire fighting activities.”

Onlookers watch as smoke rises from the top deck of the Asuka II on Tuesday afternoon in Yokohama. (AP Photo/Koji Sasahara)

The Asuka II had been docked in just outside of Tokyo in Yokohama since April, after returning from Singapore, where it was undergoing maintenance. The Asuka II is currently out of service until at least mid-July due to the ongoing coronavirus health crisis.