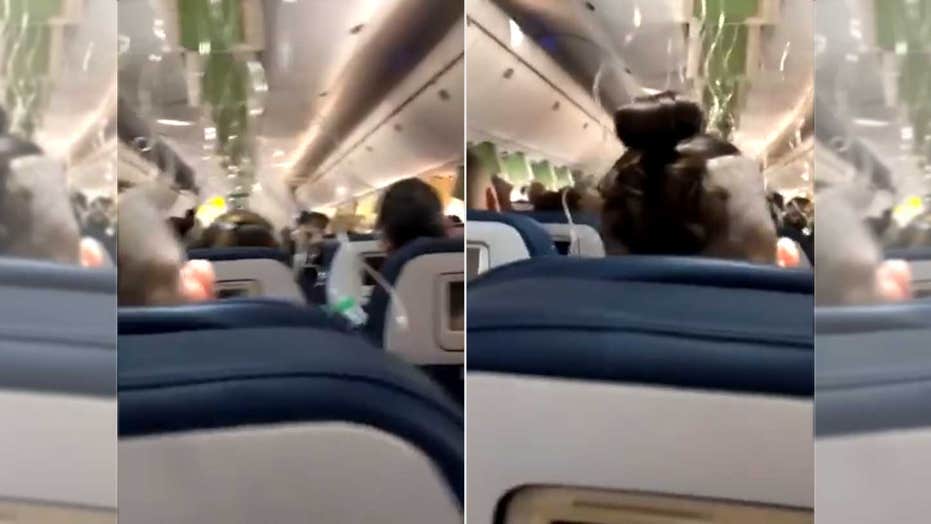 A Delta Air Lines flight headed for Fort Lauderdale, Fla., was diverted on Wednesday due to a “cabin pressurization irregularity” that reportedly forced pilots to make a quick, controlled descent, Delta said.

Flight 2353, which originated in Atlanta, was forced to make an emergency landing in Tampa at around 5 p.m., approximately an hour and a half after takeoff, flight records show.

In photos and video taken from inside the cabin, oxygen masks — which were manually deployed by the crew — could be seen hanging from the cabin’s ceiling.

A passenger aboard the plane described the scene as both scary and chaotic.

"Air masks, the oxygen masks dropped from the top of the plane. Chaos sort of ensued amongst the passengers,” Harris DeWoskin, told WSB-TV.

Another passenger said on Twitter that he quickly texted his family to tell them he loves them before hugging his young son. He also took the opportunity to praise the Delta crew for their handling of the event, as did others.

Delta has since apologized for the incident in a statement shared with Fox News.

“We apologize to our customers on flight 2353 from Atlanta to Fort Lauderdale, which diverted to Tampa out of an abundance of caution and landed without incident following a cabin pressurization irregularity en route,” the airline stated.

After landing, passengers were transported via bus from Tampa to Fort Lauderdale.

The aircraft is currently being evaluated by maintenance teams.