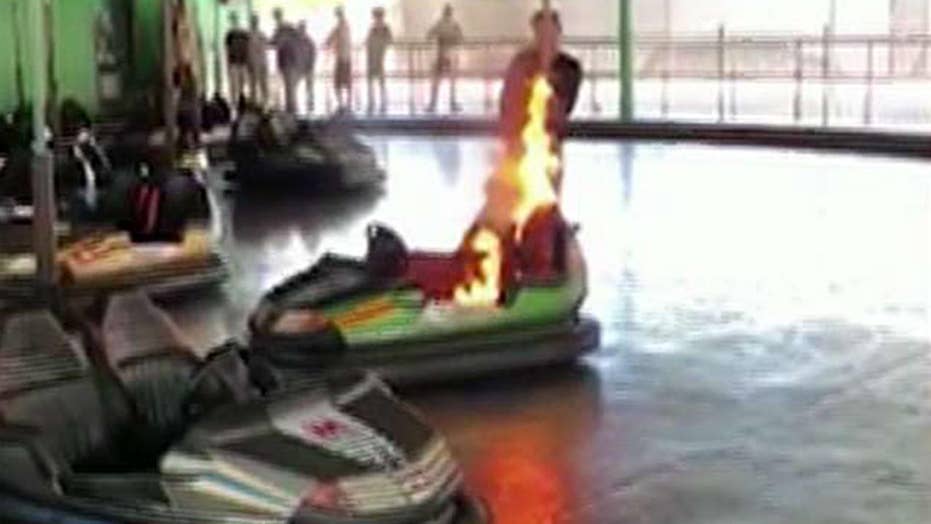 Parkgoers at a North Carolina amusement park were in for a fright when a bumper car suddenly burst in flames earlier this week. Thankfully, a ride attendant quickly extinguished the flames, and no one was injured.

The incident took place at the Carowinds amusement park in Charlotte on June 4, when the double-seater bumper car vehicle at the Dog'ems ride caught fire, Fox 46 reports.

A representative for the park said that the last passenger to ride the bumper car had left the vehicle before the blaze began. It remains unclear at this time exactly what set it ablaze.

"[It's] nothing I’d ever expect, but [you] never know when something like this could ever happen," witness Scott Spainhour told CBS 17 of the incident, which happened around 12:30 p.m. Watching his children, Spainhour cleared his kids out of the area and took video of the flames.

"The ride attendant immediately responded with a fire extinguisher as trained," the amusement park told Fox 46 in a statement. In the days since, the Dog'ems ride has been inspected, tested and resumed normal operations, a representative for the park added.

Fox 46 followed up the next day interviewing parkgoers about the incident, with many voicing sentiments of shock.

"The very first thing I thought was hopefully no one was hurt," said avid parkgoer Cecilia Dennis. "Secondly, I probably will never ride the bumper cars."

"In all my 30 years, having been born and raised here and having gone to Carowinds since I can't even remember, I've never once seen anything go wrong here," she added.

"That's so scary," Cortney Cordell agreed. “I have two kids myself so I rely on the rides to be safe and it makes me question the safety of the rides there."

As for the grounds themselves, Carowinds is a 400-acre theme park located on the border of North and South Carolina, a press release confirms. Though the Dog’ems ride is on the South Carolina side of the park, the North Carolina Department of Labor told Fox 46 that the park is inspected every year before opening.

"Our inspectors are out there working diligently to make sure those rides are up to those 100 percent manufacturers' specifications in order to open that ride to the public," said Mary Katherine Revels, from NC Department of Labor.