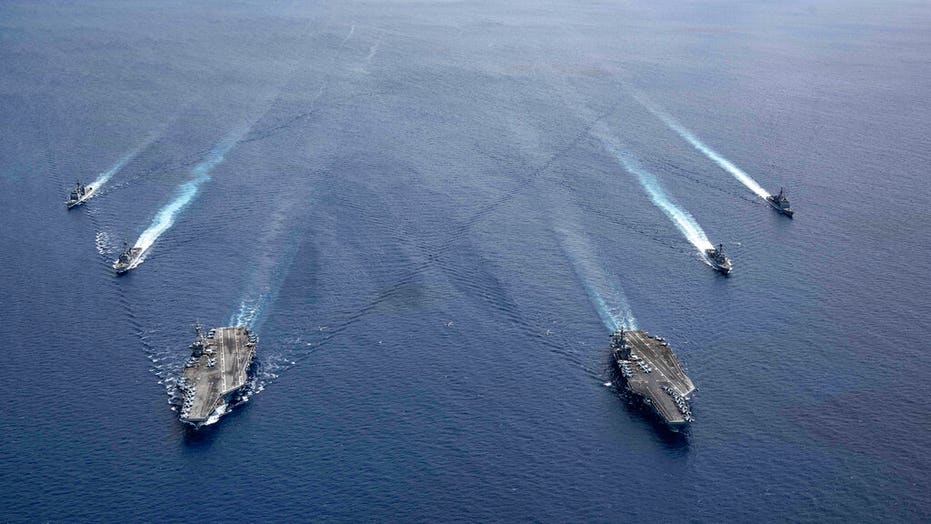 The U.S. Navy’s quest for 355 ships raises questions about the extent to which sheer numbers of platforms can offer new dimensions of combat power.

Would a high number of warships be enough or could fewer high-tech ships controlling unmanned systems have an equivalent or even superior impact?

Some have maintained that the technology woven into modern and emerging future vessels is so sophisticated that it would give America an advantage without necessarily adding large numbers of new ships.

The hope is that long-range sensors, multi-domain synergy, manned-unmanned teaming and a large platform “mothership” might achieve the requisite combat superiority without necessarily relying upon hundreds of ships.

However, others argue that the current fleet is simply ill-equipped to meet combatant commanders’ demand for sustained and widespread global operations. Such a concept provides the foundation for why the Navy has been asking for as many as 12 carriers and a fleet as large as 355 ships or more.

Navy shipbuilding plans have specified a path to achieve that goal, a roadmap that includes adding submarines, destroyers, a new fleet of amphibious assault ships and of course, an additional carrier.

Some observers point to the size of the Navy during the Reagan era, which exceeded 500 ships, as a way to make the point that a more sizeable fleet enables the service to project global power, protect strategically vital global waterways and of course deter potential adversaries.

However, the seemingly contrary points of view on a large Navy vs. fewer higher-tech drones invites an interesting thought. Why not both? Each strategy might bring an unprecedented advantage to maritime warfare.

There are several reasons why it is likely to make sense to pursue such an ambitious strategy, provided budget priorities could be properly aligned.

If that happened, two concerns come to mind: multi-domain warfare and major power two-front war. After all, it is well known that modern warfare changes the equation in a radical way, removing the likelihood of traditional, more linear force-on-force engagement limited to a narrow or clearly defined geographical area.

Warfare today will be multi-domain, dispersed, information-driven and will heavily involve previously less-impactful domains such as cyber, space, electronic warfare and artificial intelligence.

Long-range weapons and sensors, over-the-horizon aerial nodes, undersea-surface-air-land networking and emerging space weapons and warfare technologies will expand warfare in seemingly limitless ways. No longer will a fleet of battleships or a carrier strike group simply target a geographical region for targeted attacks.

While those missions will still exist, future engagements will rely on the speed of processing information. For instance, stealth bombers, tanks, submarines and destroyers will all operate as combat platforms as well as information nodes connecting otherwise separated areas of combat operation.

Perhaps a forward-operating armed Unmanned Surface Vessel network with other surface drones to identify an enemy submarine attack force with sonar? The unmanned system, able to operate safely close to the enemy, sends real-time data to air drones and surface ships to attack from afar.

One senior Navy leader put it in “mothership” terms, saying that big platforms such as amphibious assault ships could command and control a fleet of literally thousands of unmanned systems. Imagine this fleet conducting surveillance missions, testing enemy defenses, finding optimal areas for attack, performing high-risk targeting missions, and transporting amphibious forces and weapons for attack. All of this involves at least networking with undersea, surface and air platforms. This enables manned ships to operate in a more disaggregated, yet intricately connected, fashion. In turn, such a manned-unmanned fleet could operate over a wide swath of combat operations.

What all of this may amount to, simply put, is that both a larger Navy and groups of advanced technologies would be needed for a major-power engagement of any kind, let alone some kind of two-front U.S. war against both Russia and China simultaneously.