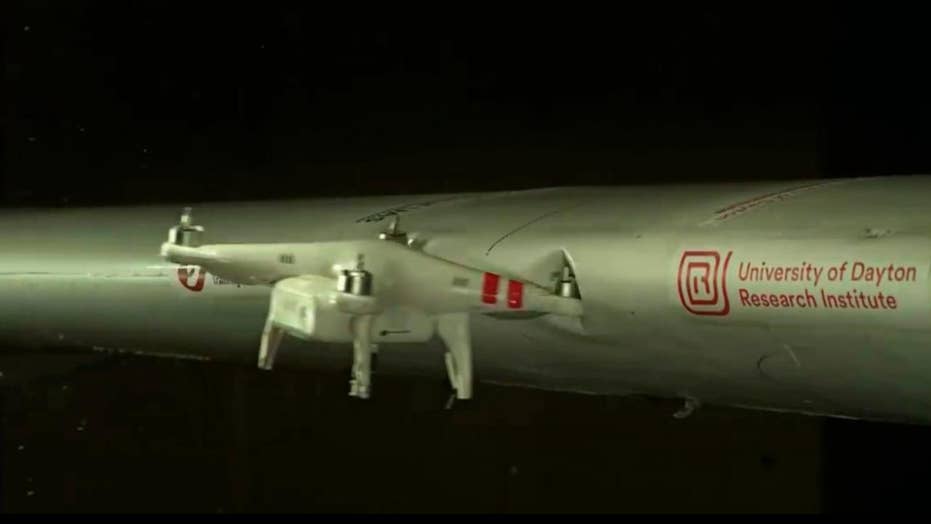 University of Dayton Research Institute released stunning video of a test which mimicked a midair collision at 238 mph ofa 2.1-pound DJI Phantom 2 quadcopter into the wing of a Mooney M20 aircraft.

A video produced by the University of Dayton Research Institute shows in alarming detail what happens when a drone collides with a plane.

The test, which mimicked a midair collision at 238 mph, launched a 2.1-pound DJI Phantom 2 quadcopter into the wing of a Mooney M20 aircraft. Experts from UDRI’s Impact Physics group note that the drone did not shatter on impact, but tore open the wing’s leading edge, damaging its main spar.

The video, however, has been slammed by DJI, which describes the test as "misleading." In a statement released Friday, the drone manufacturer says that the simulation was staged at both faster than maximum possible speed and Federal Aviation Administration guidelines.

UDRI described the results of its test in a blog post accompanying the video, which was posted to YouTube on Sept. 13. “While the quadcopter broke apart, its energy and mass hung together to create significant damage to the wing,” explained Kevin Poormon, group leader for impact physics at UDRI.

“We’ve performed bird-strike testing for 40 years, and we’ve seen the kind of damage birds can do,” Poormon added. “Drones are similar in weight to some birds, and so we’ve watched with growing concern as reports of near collisions have increased."

DJI is demanding that UDRI withdraw its video and blog post on the drone collision. "UDRI staged its video to create a scenario inconceivable in real life, at a higher speed than the combined maximum speed of the drone and airplane, which is also faster than U.S. Federal Aviation Administration (FAA) testing guidelines," it said in its statement.

UDRI told Fox News that the test was designed to serve as a comparative study between a bird strike and a drone strike on an aircraft wing. "There are currently no FAA crash test parameters for drone strike testing," it said, in a statement emailed to Fox News Sunday.

The blog post was updated again on Monday. The test aimed to compare a bird strike and a drone strike, using a drone similar in weight to many hobby drones and a wing selected to represent "a leading edge structure of a commercial transport aircraft," according to Poormon, in Monday's update. "The drone and gel bird were the same weight and were launched at rates designed to reflect the relative combined speed of a fully intact drone traveling toward a commercial transport aircraft moving at a high approach speed," the statement added.

The potential risk posed by drones to aircraft has attracted plenty of attention in recent years. In the UDRI blog post, Poormon also cited a collision between a hobby drone and an Army Blackhawk helicopter last year. The incident near Hoffman Island, just off Staten Island, New York, was the first confirmed mid-air collision in the U.S. between a drone and a manned aircraft.

The helicopter suffered minor damage while the DJI Phantom 4 drone was destroyed, according to a report by the National Transportation Safety Board.

FAA SAYS IT'S FINALLY 'CATCHING UP' TO DRONE TECHNOLOGY; SEVERAL PROGRAMS IN THE WORKS

The first confirmed drone collision with a commercial aircraft in North America took place in Quebec City, Canada, in October 2017. The small drone crashed into a twin-propeller Beech 100 King Air with six passengers and two crew members aboard as the plane was descending to land. No one was injured, and the plane landed safely with only minor damage.

Last year, the FAA and the Alliance for System Safety of UAS through Research Excellence (ASSURE) released the results of a major air-to-air collision study. Researchers found that the areas of manned aircraft most likely to be impacted are the leading edges of wings, vertical and horizontal stabilizers, and windscreens.