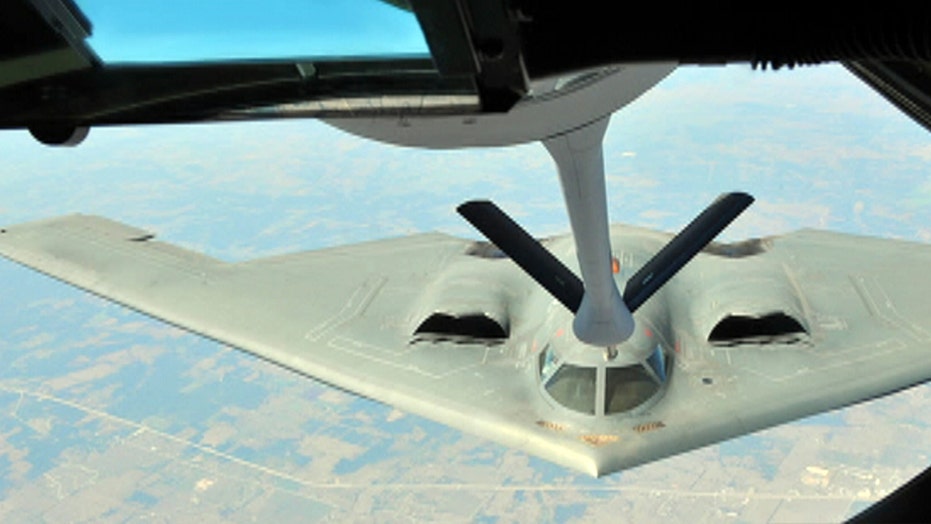 War Games: All you need to know about the new stealth bomber

There’s a new stealth bomber joining the U.S. Air Force and it will be one incredible aircraft. In war, this strike aircraft can fly deep into hostile areas – undetected – where it can unleash serious munitions against an enemy.

The Air Force announced Tuesday that it chose Northrop Grumman to build the next generation long-range strike bomber. The Air Force has not yet chosen a name for the aircraft, which folks are referring to as “B-3”.

The new strike bomber will start deploying in about a decade. The aircraft is expected to replace the nearly four-decades old B-1 as well as the legendary B-52 Stratofortress that has served the country for about six decades.

This new bomber will be fully loaded with lots of technologies and next-gen innovations that are cloaked in secrecy. It may even withstand nuclear weapon-generated electromagnetic pulses (EMPs) and still operate.

The military has kept details of the wish list for its new bomber classified.

During the Super Bowl, Northrop Grumman’s ad featured a new aircraft shrouded in mystery – literally cloaked at one point. Some industry experts believe this was a representation of Northrop’s vision for the new mysterious bomber.

We can look to the B-2 bomber, also made by Northrop, for an idea of what we might expect. The B-2 aircraft has been a mainstay for the military with its stealth long-range and big payload strike bomber capabilities.

The B-2 Spirit Bomber carries a crew of two and took its first flight in 1989 and entered the operational fleet in 1993. The original B-2 fleet was 21 aircraft.

B-2 is built for stealth. During the Cold War, it was designed to beat air defense systems, penetrating deep into Soviet Union airspace and deliver a nuclear bomb if necessary. Its design allows it to evade radar and makes it tough to detect. Instead of metal, the structure is made from advanced composites like resin-impregnated graphite fiber.

The aircraft can travel a very long range - to approximately 6,000 nautical miles. If the aircraft is refueled while in the air, then it can fly even farther - an additional 4,000 miles without landing.

This bomber can carry more than 40,000 pounds of nuclear or conventional munitions – that’s the kind of power that can dramatically change the battle space in one flight. The aircraft is designed to deliver these munitions precisely on target even in adverse weather conditions.

Whiteman Air Force Base in Missouri is home to the majority of the current B-2 fleet. The aircraft has deployed recently in combat in Libya, Afghanistan and Iraq.

Since it was introduced more than 20 years ago, many advances have been incorporated to improve the B-2's lethality. The aircraft’s ability to receive updated target data while in the midst of a mission was also improved. Other upgrade programs improved the B-2’s capabilities to collect, process and then distribute battlefield data to teams throughout the world.

The sleek B-2 has a unique flying wing design that supports its radar evasion and hard to detect design. The Super Bowl commercial showed a sort of bat wing shape, similar to B-2, but the specs of the new plane have remained secret.

"The Air Force has made the right decision for our nation's security,” said Northrop Grumman CEO Wes Bush, in a statement regarding Tuesday’s announcement. “As the company that developed and delivered the B-2 Spirit stealth bomber, we look forward to providing the Air Force with a highly-capable and affordable next-generation Long-Range Strike Bomber.”

Ultimately, the military is expected to invest about $80 billion in creating this game-changing tech. According to current U.S. Air Force estimates, the B-3 stealth aircraft will be about $564 million a pop.