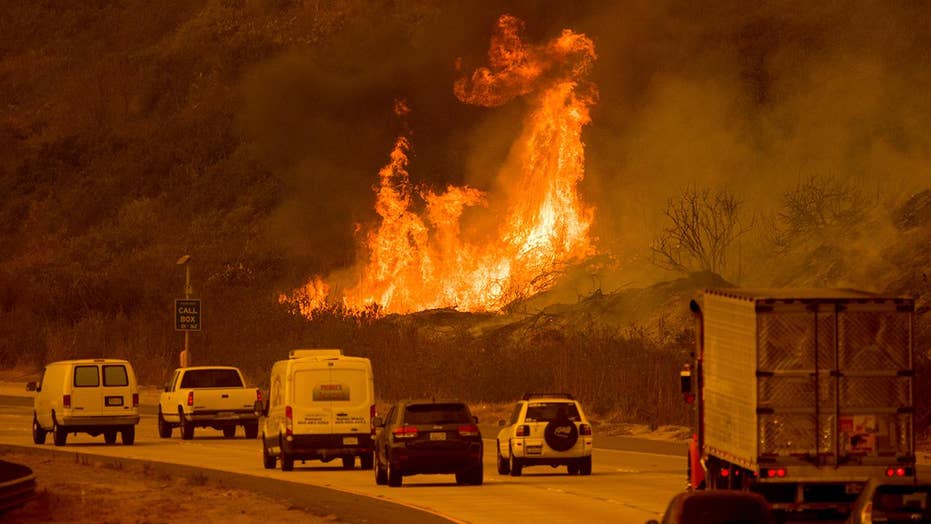 Firefighters are battling the blazes fueled by the whipping Santa Ana winds; Adam Housley has the details for 'Special Report.'

Two of the biggest titans of the tech industry, Apple CEO Tim Cook and Google CEO Sundar Pichai both weighed in with concerns over the southern California wildfires, which have wreaked havoc on the lower part of the state.

Making comments on Twitter, Cook, who has used his account to weigh in on a number of political and social issues, said that Apple's thoughts are with those affected by the wildfires. "Our thoughts are with our fellow Californians affected by the devastating wildfires, and the brave firefighters working to contain them—please stay safe," Cook wrote.

Like Cook, Pichai also expressed concern and noted that Google would be pitching in to help with the efforts.

"Thinking of those affected by the fires in Southern California," Pichai wrote. "@Googleorg and Googlers are committing up to $500K in support of relief efforts."

Facebook COO Sheryl Sandberg also expressed condolences and said that Facebook would be donating $500,000 to Global Giving for relief.

The fires started on Sunday and are expected to worsen Thursday, as wind gusts of more than 50 mph went through the greater Los Angeles region. The dangerous winds are forecast to fan the flames in different directions and force more evacuations from a region where more than 200,000 people have already fled.

Residents across the region are wary after seeing nearly 200 homes and buildings destroyed since the fires broke out late Sunday.

“We are in the beginning of a protracted wind event,” Ken Pimlott, director of the California Department of Forestry and Fire Protection, told the Los Angeles Times. “There will be no ability to fight fire in these kinds of winds.”

The Skirball Fire, which erupted Wednesday morning, has burned about 500 acres so far near large estates in the ritzy Bel-Air neighborhood of Los Angeles and is only five percent contained.

No fatalities or civilian injuries have been reported since the firestorm started Sunday, according to Reuters. Three firefighters were injured and hospitalized in stable condition as a result of the Skirball Fire, the Los Angeles Fire Department said.