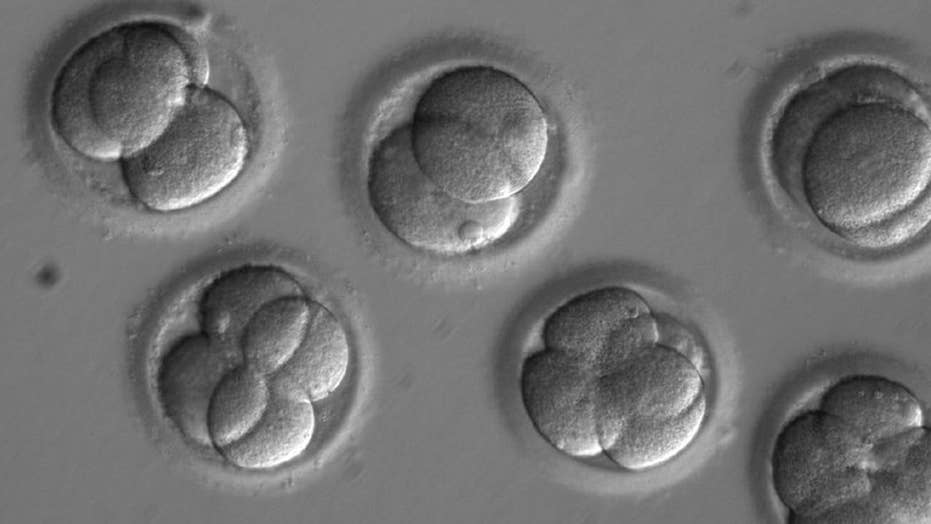 Should science be getting involved in embryo gene repair?

Parents -- including perhaps even same-sex couples -- may soon be able to select their ideal embryo from several dozen potential candidates created using their cells, experts say.

The possibility, which some researchers say could occur in the next 20 to 40 years, sets the stage for what ethicists warn would be a political and moral quagmire.

"The majority of babies of people who have good health coverage will be conceived this way," predicts Henry Greely, a Stanford University law professor who works in bioethics.

Scientists have shown that in mice, they can turn ordinary cells into sperm and eggs, and scientists are reviewing the potential for the technology to apply to humans as well.

If proven viable in humans, the technique could become a powerful infertility treatment, permitting genetic parenthood for people who can't make their own sperm or eggs.

WOMAN GIVES BIRTH TO BABY FROZEN AS EMBRYO FOR 24 YEARS

It also would mean that a woman who wants to get pregnant could produce dozens more eggs per attempt than with the current procedure of harvesting some from her ovaries.

The technology could even open the door to same-sex couples having children genetically related to both of them, though the additional twist of making eggs from men or sperm from women would be a huge biological challenge. It could also be useful for couples hoping to avoid birthing a diseased or disabled child.

"No patient has ever came to me and said, 'I want a designer baby.'"

Greely, who lays out his ideas in a book called "The End of Sex and the Future of Human Reproduction," calls his vision "easy PGD," or prenatal genetic diagnosis. But the drawbacks, critics warn, could be severe.

For example, some have asked, once the genetic profile is done, could it come back to haunt a child if, say, a life insurer or nursing home demanded to see it to assess disease risk?

How would the large number of rejected embryos be handled ethically and politically?

Lori B. Andrews, a professor at the Chicago-Kent College of Law, summed up her views in a review of Greely's book.

"The idea of easy PGD," she wrote, "should make us uneasy indeed."

Also worrisome is the so-called Brad Pitt scenario: We all shed a bit of sloughed-off DNA every day, like on the lip of a coffee cup. Such discarded material could be secretly snatched up to turn an unwitting celebrity into a genetic parent.

Still, even some who doubt the idea's feasibility say Greely is right to raise the issue.

"It's certainly something we have to take seriously and think through now," said Marcy Darnovsky, who writes on the politics of human biotechnology as executive director of the Center for Genetics and Society in Berkeley, California. "This is not just a technical or science question."

Dr. Louanne Hudgins, who studies prenatal genetic screening and diagnosis at Stanford, said no national medical association has endorsed decoding all the DNA of a fetus. She believes no insurance company would pay for that now.

Hudgins and other experts expressed doubt that many couples would want to use the technology to create a 'super-baby.'

Only a "very small minority" seek a perfect baby, says Hudgins. In her practice, she said she often finds women pass up all screening because they figure the baby's fate is "in God's hands."

Dr. James Grifo of the New York University Fertility Center also questions how popular the idea would be.

"No patient has ever came to me and said, 'I want a designer baby,'" said Grifo, who's performed in vitro fertilization since 1988.