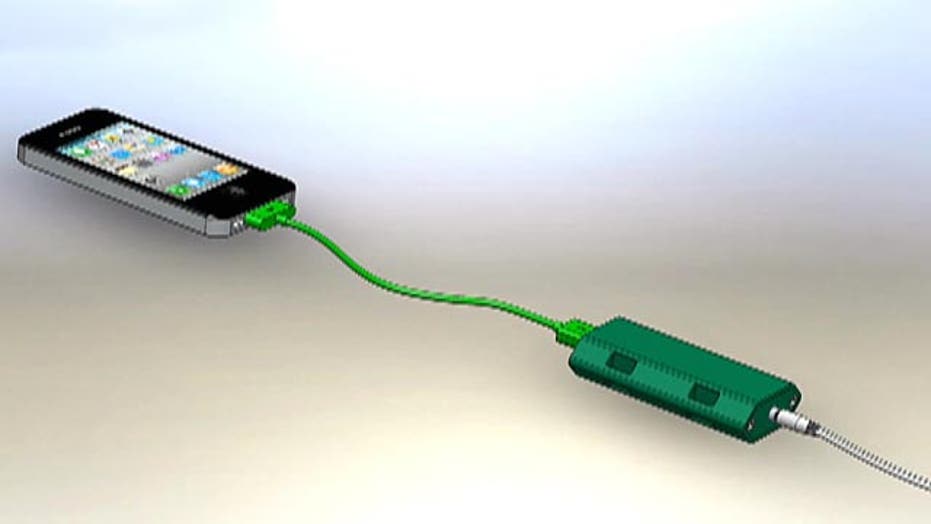 A charger uses the power of the pedal to charge smartphones

A bike ride and a low cellphone battery helped launch a business for a group of teens in Sweden. The young entrepreneurs didn’t have much experience in electronics, but with some help, they have created a device that uses the spinning wheels of a bike to charge a cellphone.

Spinning Power UF, the name of business, is the brainchild of Philip Zachrison, 18, from Ängelholm, Sweden.  Zachrison, along with four of his classmates, recently won 4,000 Swedish Kronas ($550 dollars) in a “Shark Tank” style competition in his hometown. Although it doesn’t seem like much money for a startup, the group thinks the win and the cash boost will help launch their company, which is already being approached by other businesses looking to produce the charger.

“It’s exciting. Mainly because it’s real life, it’s no longer just a vision, it’s happening, we’re working and we want to do the best that we can,” said Zachrison.

“The Charge Up,” as Zachrison is calling it for now, was created as part of a school project where students create a business and run it for one year. With the success Spinning Power UF has had and the excitement generated by the product, Zachrison said he may try to keep it going beyond the one-year mark.

“If it’s possible, I would continue running the company. It’s be fun to see how far it could go,” he explained.

Although the device isn’t necessarily a new idea for bike enthusiasts looking to charge their smartphones, the group hopes that its design will be cheaper and simpler to use than some other commercially available bike phone chargers.

“We know there are similar products. The difference is mainly the price, we’re going to aim to be as cheap as possible,” said Zachrison. However, he doesn't yet know what the device's price will be.

The U.S.-designed Atom bike phone charger from Siva Cycle has a removable battery pack for power when not riding. It costs $129 and is now available to order after a successful Kickstarter campaign. But unlike the Atom, The Charge Up would only power the phone when the bike is moving and does not store energy in a battery pack. Zachrison hopes that will cut costs on production and make it a cheaper option for bikers.

Zachrison said that the group's product won't need complicated installation, adding that users can put their phone wherever they want on the bike.

“It doesn’t have to be stationary on the bike. It will only charge when you’re biking, that’s why it’ll be cheaper,” he explained.

The Charge Up needs the bike to be moving at roughly 3 miles per hour to generate enough electricity to charge the phone. It outputs the electricity as 5V/1A, the specs smartphones need.

But speed demons won’t be able to charge their phones any faster than casual riders. As long as the bike is going above 3 miles per hour, Zachrison said it would take around four and a half hours to fully charge a phone.  He also said the charging time can depend on the phone and condition of the battery.

Zachrison said that the group's product will be compatible with smartphones from all over the world. The only requirement is that the phone’s USB cable has to plug into the USB port of The Charge Up.

“We’re looking at two types of customers; those biking regularly to and from work, and the other bikers on long rides through Europe, Sweden. Those who obviously need to charge devices along the ride,” said Zachrison.

For Spinning Power UF, all that’s left to figure out is the plastic casing. The electrical and technical aspects have been nailed down and now they need to design the device's exterior. Zachrison said they hope to have that figured out by the end of November.

While Spinning Power UF’s prototype looks promising, if nothing else, Zachrison said the students from the business project hope to make contacts with other companies before heading off to a university or the workforce.  He said it’s been a great experience for the team to learn how to build a business and get a taste of what it’s like to run a start-up company.

“It’s amazing we get the chance to do this, not everyone gets this chance,” said Zachrison.

The next step for Spinning Power UF is to get the device into production and onto the shelves. “We’re going to try to sell as much as possible,” Zachrison noted. “Hopefully we’ll have some positive feedback.”