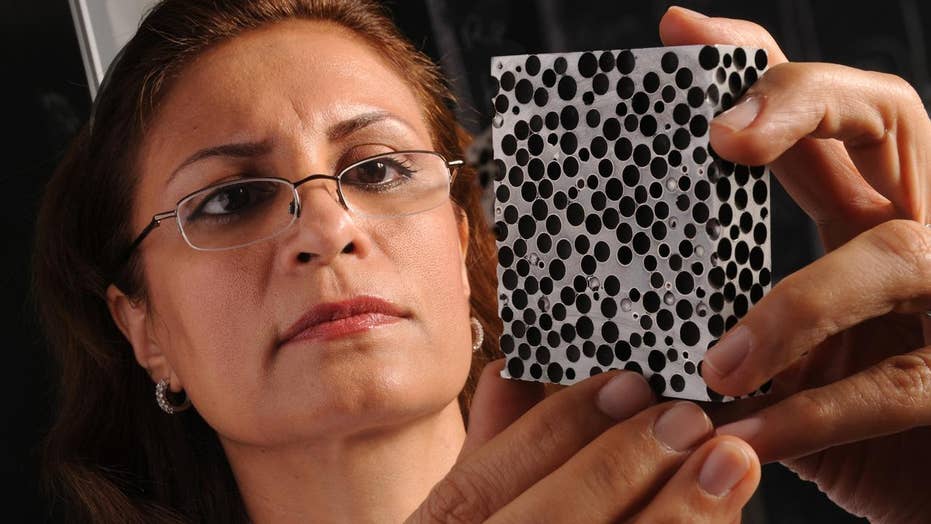 Defense Specialist Allison Barrie shares the inside scoop on breakthrough new foam that could provide better protection than Kevlar or tank armor, and is strong enough to pulverize armor piercing rounds.

A revolutionary new material called Composite Metal Foam, or CMF, can pulverize enemy rounds and could even be used as an armor to protect tanks and other combat vehicles.

Believe it or not, this breakthrough foam may provide greater protection than traditional armor steel plates.

It is also far lighter than current armor. How much lighter? This foam has the potential to dramatically reduce the armor weight on combat vehicles by about 65 percent.

This is a discovery with potential to revolutionize future tanks and armored vehicles.

Tests continue to prove that this foam not only stops rounds, but it can smash the would-be armor piercing rounds into smithereens. (U.S. Army)

In addition to defending against direct hits by powerful enemy weapons, the wonder foam may also deliver better protection from explosion blast waves, deadly “cookoffs” and even radiation.

Scientists at North Carolina State University and the U.S. Army’s Aviation Applied Technology Directorate have been working together on this remarkable foam.

What exactly is it?

Basically, it is foam made out of metal — hence “metal foam.”

Let’s say a tank covered in this foam armor gets a direct hit by one of the enemy's tank main guns. When it strikes the CMF, the foam’s hollow spheres ‒ the “holes” ‒ absorb some of the strike’s energy and help resist damage from the hit.

Armor piercing rounds versus the foam

Armor piercing rounds are a serious threat — and a growing threat, as they have become more widely used by enemies of the United States. These rounds are designed to tear through heavy armor like it is aluminum soup can for maximum destruction.

It may seem hard to believe, but tests continue to prove that this foam not only stops rounds, but it can smash the would-be armor piercing rounds into smithereens.

In one test, one inch of this remarkable foam faced off against an M2 .30 caliber armor piercing bullet. The bullet travels with 2,780 foot-pounds of energy and when it makes contact with the foam, that armor piercing round is Hulk-smashed by the foam.

Explosions versus the foam

The CMF is also remarkably good at deflecting blast waves.

Improvised explosive devices (IEDs) have unfortunately become a cruel, crude, commonplace weapon for enemies of the United States. The immediate blast and shrapnel can inflict devastating damage to personnel and vehicles. Less well known, these bombs also pose another threat that is not visible.

The explosions yield shock waves and these invisible waves of energy can impact the brain. These waves can cause harm and play a role in traumatic brain injury.

Tests have shown this foam may also provide better protection for warfighters inside a vehicle from these shockwaves.

If a tank is rolling through a war zone and an IED goes off nearby, the foam armor structure helps absorb the blast, better protecting the warfighters inside.

Tests have shown the foam can provide enhanced protection from heat. When put to the heat challenge, heat took twice as long to pass through the CMF as it did with typical stainless steel.

The foamy holes in the material also play a role in slowing heat transmission.

In practice, this slow heat transmission quality could be vital to save lives. If, for example, heat from a nearby explosion is enough to cause sympathetic detonation of a tank's unfired ammo, then the foam could crucially slow down the travel of this heat.

These “cookoffs” are very serious and deadly. Even seconds can be paramount in giving the warfighters time to leave the tank before it is too late.

Tanks are beasts. The M1 Abrams Main Battle Tank, for example, weighs in at more than 60 metric tons, so every pound matters.

Here’s a practical example: A future vehicle could theoretically be kitted out with just 4 tons of CMF, rather than 12 tons of the traditional armor.

This means approximately the same protection, but with armor that is 8 tons lighter.

Imagine what an impact lighter weight could have on future combat vehicles. This remarkable foam would then be providing yet another whole set of advantages, from faster speeds through to more maneuverabilty and agility.

The Army is considering next gen replacements for the M1 Abrams main battle tank and M2 Bradley infantry fighting vehicle, both of which will require state of the art, groundbreaking armor.