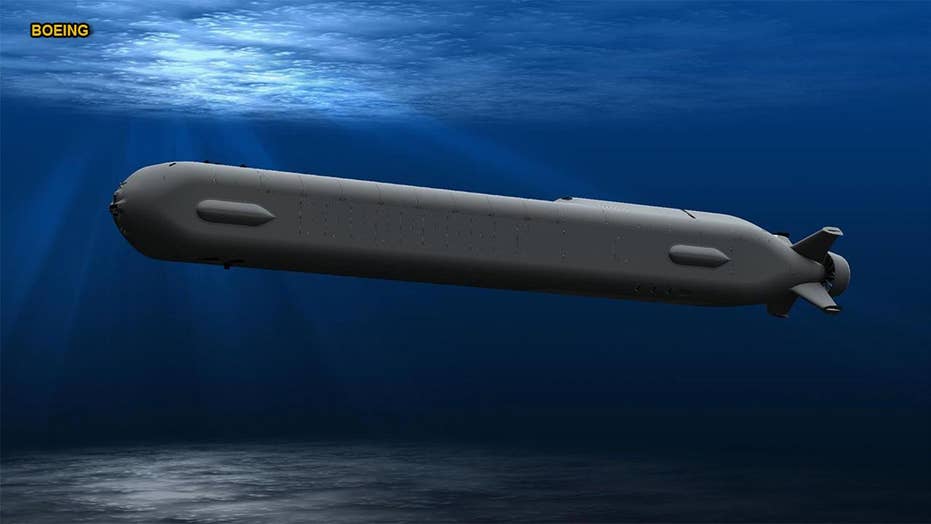 Orca, a 50-ton Extra Large Unmanned Under Sea Vehicle, is part of a Navy plan to integrate large undersea drones into its existing fleet. The massive undersea drone is being developed with multiple layers of autonomous operation in mind, including long-range, undersea torpedo attacks and surveillance.

The 50-ton Orca, which would not fit in a submarine launch tube, brings an unprecedented sensing, endurance and attack advantage. The Navy has finished its Critical Design Review of the Orca, called an Extra Large Unmanned Undersea Vehicle, and begun construction, Capt. Pete Small, Program Manager for Unmanned Systems, Naval Sea Systems Command, said in early May at the Navy League’s Sea Air Space Symposium.

Earlier this year, Boeing was awarded a $43 million deal to build four Orcas. Boeing's XLUUV Orca is based upon its Echo Voyager and Echo Ranger undersea drones. The Echo Ranger is an 84-foot long, massive underwater drone able to reach depths of 11,000 feet and hit ranges up to 6,500 nautical miles, according to Boeing data. The drone has obstacle avoidance, senor carrying capacity of up to 34-feet, autonomous buoyancy and Synthetic Aperture Sonar, Boeing data states.

Initial applications for the Orca include land-launched operations as a key step toward surface and undersea launches, Small said. The 50-ton Orca is too large to be launched from a submarine or ship in most instances, at the moment. For now, the drone is primarily launched from a land dock the larger Orca drone fits into the Navy’s broad priority of pairing undersea drones with surface “mother ships” able to coordinate command and control, receive information and, in some cases, direct mission activity for the drones.

ALL 3 NAVY ZUMWALTS NOW 'IN THE WATER' – HOW CAN A DESTROYER BE STEALTHY?

The Navy plan is to one day soon have forward-positioned undersea drones able to fire weapons. Extra Large UUVs, such as Boeing’s Orca, are certainly large enough to accommodate weapons payloads, and it seems such an option is entirely feasible, depending upon the pace of undersea connectivity and fire control. Of course, it goes without saying that use of any kind of lethal force would, according to Pentagon doctrine, require a human functioning in a role of command and control to make attack decisions.

An interesting essay from the National Academy of Sciences, called “Military Robotics: Latest Trends and Spatial Grasp Solutions,” cites the unprecedented advantage of being able to send large undersea drones through the open ocean for as long as 70-days. (Peter Simon Sapaty)

An undersea sensing UUV, like that which Capt. Small describes, instantly introduces a new realm of combat strategies and tactics, many of which are still being developed. The first and foremost, it seems apparent, would simply be an opportunity for greater undersea security and stealth. Given the high-risk nature of its mission scope, an attack submarine could greatly benefit from an increased ability to conduct reconnaissance missions close to enemy shorelines and in the open ocean -- while remaining undetected. Small’s conceptual vision, which is now being refined and explored throughout the Navy leadership, is to enable forward operating attack, ISR and undersea networking with other manned and unmanned assets. The Naval Sea Systems Command, Small explained, is now working on air, surface and sea manned and unmanned networking with NAVAIR - Naval Air Service Command. (stay tuned for surface drone and networking stories coming next).

The Orca and other UUVs are also now the subject of a fast-evolving Navy Unmanned Maritime Autonomy Architecture (UMAS) program, which involves engineering and testing “different layers of autonomy,” according to Small. Autonomy can enable mission scopes previously not possible, such as longer-range undersea attack and surveillance. A forward-positioned undersea drone could, of course, operate in dangerous areas filled with mines, enemy submarines or other threats in both deep water and coastal areas. Being unmanned, they can also enable submarines to hit undersea, surface or land targets with greater standoff distance and improved targeting. At the moment, undersea drones predominantly gather data and then return to a host ship before downloading data. The service is now working to evolve and refine a handful of new ways to communicate undersea in real time, in some cases using video-guided autonomous undersea attack drones. Other emerging technologies enable submarines to make use of undersea "GPS-like" connectivity.-- (For Warrior Maven's Story on DARPA undersea GPS-like tech Click Here)

The National Academy of Sciences’ essay, among other things, points out the merits of “long-endurance” and “autonomy” associated with extra-large UUVs like the Orca, explaining that a larger form factor will likely increase the technical capacity of propulsion systems, thereby enabling longer missions and dwell time for missions. With propulsion and endurance in mind, the Navy is also advancing new explorations into emerging battery technologies, fuel cells and other ways to make forward UUVs more “energy dense.”

As part of this developmental trajectory, the Navy will accelerate integration of medium and larger undersea drones, which will include launching and recovering multi-mission undersea drones from submarine torpedo tubes.

“An environmental sensing UUV (Unmanned Undersea Vehicle) will be hosted on a submarine, and we will develop torpedo tube launch and recovery for that medium size,” Small said.

The construction strategy for the Orca and other drones is to engineer a new “upgradeable,” multi-mission drone able to quickly integrate new technology and payloads as they emerge. This technical platform could, in key instances, obviate the need for the Navy to build new undersea drones in the future. The concept, when it comes to application, could involve newer, upgraded sonar, networking systems, new weapons and countermine technologies.

This, Small emphasized, allows engineers to create common interfaces and standards designed to multiply the amount of payloads which can be integrated into undersea drones -- and increase commonality across the fleet when it comes to modernization of sensors, weapons and other systems. This point is further reinforced in an interesting essay, written by Small, for the Center for International Maritime Security (CIMSEC). Small explains that there is still much work to be done when it comes to this. He writes:

“Supporting the established families of UUVs and USVs are a number of Core Technology standardization efforts in the areas of battery technology, autonomy architecture, command and control, and machinery control. Most of these unmanned platforms do not immediately align with long-established support frameworks for surface ships and submarines.” CIMSEC