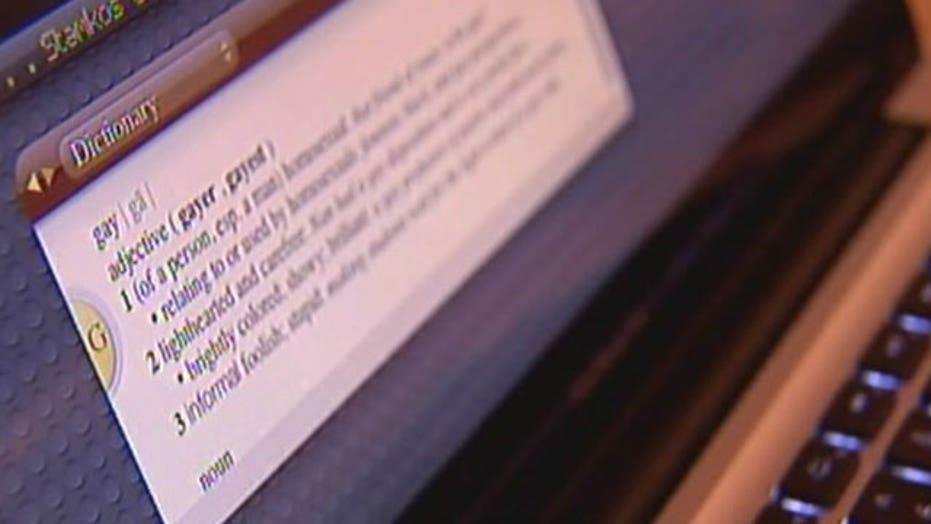 A Massachusetts teenager who was “disgusted” to find pejorative definitions of the word “gay” in Apple’s online dictionary has reportedly asked the computer giant to remove the terms.

Becca Gorman, 15, of Sudbury, was writing an essay on gay rights for her history class when she typed the word “gay” into her Macbook laptop’s dictionary. A definition of the word meaning “foolish” or “stupid” was listed alongside two others, including an example that stated “making students wait for the light is kind of a gay rule.”

The Lincoln-Sudbury High School sophomore, whose parents are lesbians, said she was shocked by the discovery.

“I think my initial reaction was just disbelief,” Gorman told MyFoxBoston.com. “I was kind of disgusted.”

Determined to see the definition removed, Gorman then wrote to Apple CEO Tim Cook, who is openly gay.

“I assume that you are a pro-gay company, and would never intend for any one of your products to be as offensive as this definition was,” she wrote, according to Boston.com. “Even with your addition of the word 'informal,' this definition normalizes the terrible derogatory twist that many people put on the word 'gay.'"

"They said that Apple streams its dictionary from four separate sources so they'd have to figure out how to get it removed, but they were also really surprised," Gorman said.

Merriam-Webster, meanwhile, defines “gay” as “sexually attracted to someone who is the same sex,” “of, relating to, or used by homosexuals” or “happy and excited; cheerful and lively.”

Gorman said she’d be fine with the troubling definition remaining in the dictionary as long as it’s noted as a pejorative term. Michelle Bowdler, Becca’s mother, said the discovery had nothing to do with anyone’s values.

“We haven’t really pushed our kids to take on our values, but to really develop their own sense of what they think is important,” Bowdler said.