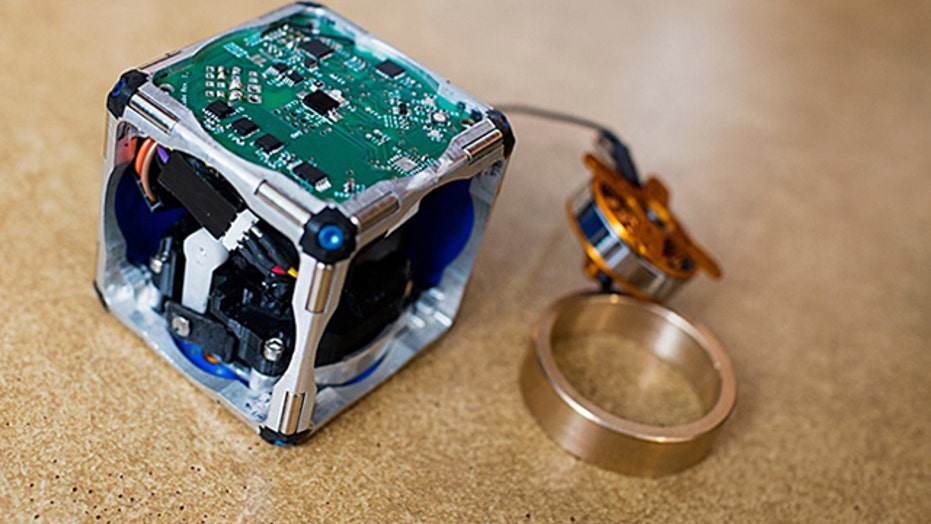 Is an army of Terminator II style “liquid” androids -- ones that can self-assemble, self-repair and transform -- finally possible?

An American team took to Tokyo last week and proved that they have laid the foundation for self-assembling robot swarms that can self-configure for a mission. They presented their work at the International Conference on Intelligent Robots and Systems.

The small cubes called M-Blocks were created by an MIT team led by Computer Science and Artificial Intelligence Laboratory (CSAIL] research scientist John Romanishin. M-Blocks look like cubes slightly bigger than those that make up a Rubik's Cube. They have no visible parts -- yet they still manage to launch themselves forward.

They can leap into the air, roll, and even climb over and around one another. Suspended upside-down from metallic surfaces, they can still move. Ultimately, M-blocks can use these maneuvers to jump onto each other to build a required shape – sort of like a robotic real-life Tetris.

Modular robot systems like the M-block could lead to microbot swarms that can self-assemble, like the shapeshifting T-1000 in Terminator II. But beyond becoming robots for war, this sort of technology also has wide potential beyond defense.

Take the recent destruction in the Philippines: Future iterations of this tech could be deployed to natural disasters ands self-assemble to support aid work. Imagine a cube army that could repair buildings, bridges and homes, even becoming heavy equipment or temporary refuge if necessary.

In the event of a biological or chemical attack, the robot swarms could enter and investigate dangerous environments reducing risk to human life. They could then transform themselves into tech solutions for the crisis.

How it works
If M-Blocks don’t have any external mechanisms, how do they move and assemble?

Inside each M-Block is a flywheel that can achieve speeds of 20,000 revolutions per minute. When this flywheel brakes, it provides the momentum to move.

Each face and edge of an M-Block has magnets that attach one cube to another. On each edge there are two cylindrical magnets and on each cube face are four magnet pairs. When a moving cube lands on another, these help it snap into place.

These cubes can literally fly through the air from any direction and the magnets then align when they land. The cubes' edges are also beveled, so if a cube begins to flip on top of another, the bevels and magnets touch.

As cubes approach each other, their magnets rotate aligning opposite poles, north with south, creating a strong connection and anchoring the pivot.

This is certainly not the only project working on paving the way towards T-1000s, but other complicated, high-tech solutions have failed in their pursuit of self-assembling robots. This team’s success is in part due to their deploy a low-tech solution.

Often in these self-assembling robot projects, an individual piece can’t move by itself like an M-Block. And on a practical level, if a block got separated from its team then it couldn’t rejoin them. Not so with the M-blocks. These little guys can make their way back to their team by themselves and rejoin.

Amazingly, these cubes can operate as a team in what is called “cooperative group behavior.”

In practice, this means that multiple cubes can work together to move other cubes and even drag assembled cube structures.

Further down the development road, cubes could be equipped to provide special tools ranging from lights and cameras through to battery packs. The MIT researchers are working on building an army of 100 cubes, each able to move in any directions and leverage new algorithms to guide them.

Ultimately, thousands of cubes could be scattered about and yet still be able to identify each other, coalesce, and configure into a required shape entirely by themselves.