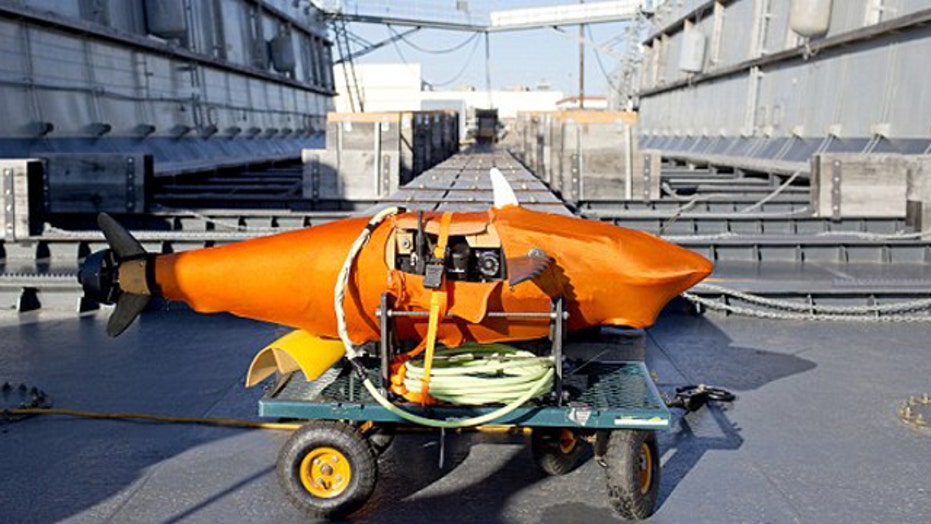 The U.S. Navy’s new state-of-the-art smart, stealth, swimming robot looks like a shark…if you can spot it.

Made by Boston Engineering, GhostSwimmer is a small, unmanned, robotic vehicle that swims through the water.

GhostSwimmer could support the Navy on a range of missions while crucially helping to keep divers and sailors safe.

This robot was designed to resemble a bluefin tuna and swims just like a fish with its tail fin moving back and forth.

Actual northern bluefin tuna can grow to a maximum length and weight of about 14 feet and 1,800 pounds.

GhostSwimmer is about 5 feet long and weighs about 100 pounds. It can operate in water depths ranging from 10 inches to 300 feet.

The smart robot has a potential maximum speed of 15 knots. Operating at a speed of three knots, its endurance is about 66 hours with an operational range of over 300 miles.

Marine life has extremely high propulsive efficiency, as well as extraordinary abilities to maneuver at both high and low speeds – far more advanced than man-made tech.

It therefore makes a lot of sense to learn from nature’s designs such as the tuna’s flexible, streamlined body with ideally placed pectoral and auxiliary fins that are propelled with a single oscillating tail foil.

Like a real fish, the robot can ‘burst swim’ with immediate propulsion and minimal drag.

Also like an actual tuna, GhostSwimmer is highly maneuverable – it can turn about a center point using its fins to provide banking. The GhostSwimmer can perform 360-degree maneuvers at flank speed in approximately one body length diameter circles.

The robot can operate by itself with a very long-lasting battery. Alternatively, a human controller can direct it with a laptop and a 500-foot tether.

This fish robot could provide a lot of advantages to the U.S. military, such as surveillance and waterborne mine countermeasures.

Since its movement mimics tuna fish, and it swims without a propeller, GhostSwimmer has a virtually undetectable acoustic signature, making it very stealthy.

Stealth is a key advantage for intelligence, surveillance and reconnaissance (ISR) missions in highly hostile areas or locations where threats might be evolving.

It could, for example, be used to intercept lethal threats approaching U.S. vessels or even deployed like schools of fish from of a vessel or fleet to investigate or react to approaching threats.

For riverine operations, its design provides the advantage of working in confined spaces with increased water flow rates. It can also negotiate winding waters.

The capability to deploy far upriver could provide advantages like taking water samples in areas where there is a threat of nuclear, chemical or biological weapons use by adversaries.

How does it compare to other systems?

When you consider the number of harbors, ports and coastal littoral zones around the world, then the utility of highly adaptable underwater vehicles like GhostSwimmer becomes clear.

Existing options tend to be torpedo-shaped and suffer from poor maneuverability, particularly in shallow areas. Lack of stealth and speed are also drawbacks.

Other systems often lack the speed, maneuverability and stealth that are useful in littoral and riverine missions.

Maneuverability is particularly important in ‘cluttered waters’ with lots of obstacles or varying water flows. It can also be essential for rapid response.

Established in 2012, CRIC provides U.S. Naval leaders with an opportunity to identify technologies that address urgent challenges the Navy faces.