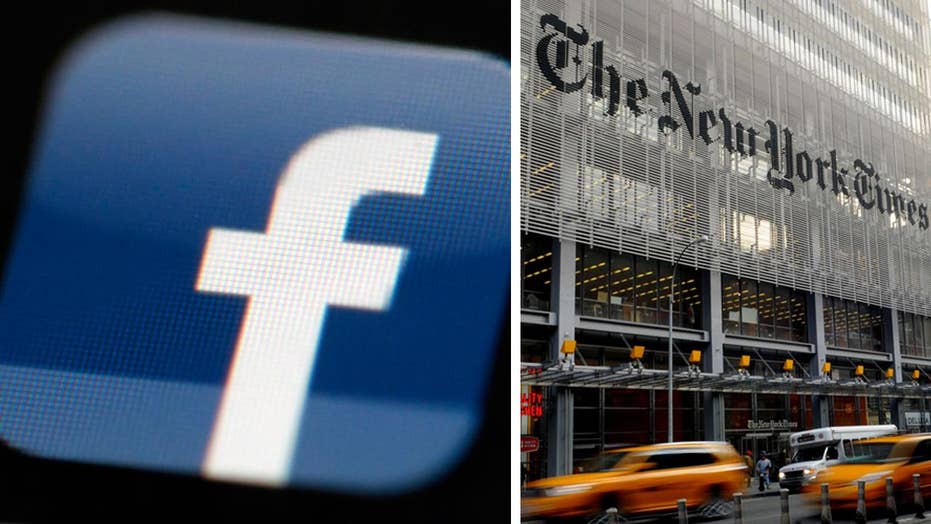 Facebook slammed a blockbuster New York Times report for "inaccuracies" and cut ties with a GOP-opposition firm after the newspaper painted a scathing portrait of Mark Zuckerberg and Sheryl Sandberg, the company's top leaders.

In a 6,100-word story, the Times reports that over a two-year period, the social network's tactics were to delay, deflect and deny as it faced increasing scrutiny over Russian disinformation and the corrosive spread of hate speech.

In a Thursday blog post, the Menlo Park, Calif.-based social media giant took issue with numerous aspects of the Times piece, which claimed that Facebook was too slow to investigate Russian interference in the 2016 U.S. presidential election and questioned the company's handling of comments made in 2015 by then-Presidential candidate Donald Trump regarding a Muslim ban. The report also claims that the company's leadership was not quick enough to combat the growing menace of fake news on its platform.

In its blog post, Facebook said that both Sandberg and Zuckerberg "have been deeply involved in the fight against false news."

The social network also fired back over the company's response to Russian election meddling. "The story asserts that we knew about Russian activity as early as the spring of 2016 but were slow to investigate it at every turn. This is not true," it said.

With regard to its handling of Trump's Muslim ban comments, the tech giant said "to suggest that the internal debate around this particular case was different from other important free speech issues on Facebook is wrong."

However, in a statement to Fox News, a spokesperson for the Times did not retract any of the conclusions in the report, saying:

"Our story is accurate and we stand by it. The monthslong investigation by a team of reporters was based on interviews with more than 50 sources including current and former Facebook executives and other employees, lawmakers and government officials, lobbyists and congressional staff members."

NO MORE FOMO? CUTTING BACK ON FACEBOOK AND SNAPCHAT WILL MAKE YOU LESS LONELY, DEPRESSED, STUDY SAYS

Facebook cut ties Wednesday evening with Definers Public Affairs amid the ongoing outcry over the Times story, but claimed the newspaper is "wrong to suggest that we ever asked Definers to pay for or write articles on Facebook's behalf — or to spread misinformation." Facebook acknowledges that Definers did "encourage members of the press to look into the funding of Freedom from Facebook," an umbrella activist group that has called for the tech firm to be broken up on anti-trust grounds. However, Facebook says that encouragement was to demonstrate that Freedom from Facebook is "not a spontaneous grassroots campaign, but supported by a well-known critic of our company [George Soros]."

While it's true that Soros, who made his fortune in hedge funds, has given money to one of the ten organizations supporting Freedom from Facebook's efforts and once called the platform a "menace" to society, the financier and philanthropist has owned shares of Facebook this year through his investment fund.

Meanwhile, Open Society Foundations President Patrick Gaspard sent an open letter to Facebook's executive leadership, board members and Congressional leaders denouncing the company's efforts to "spread vile propaganda" about Soros — a frequent target of anti-Semitic conspiracy theories who saw a pipe bomb delivered to his home last month — as "astonishing" and "beyond the pale." Founded by Soros, Open Society Foundations works in over 100 countries around the world to ensure that governments are accountable to their citizens.

"These efforts appear to have been part of a deliberate strategy to distract from the very real accountability problems your company continues to grapple with. This is reprehensible, and an offense to the core values Open Society seeks to advance," Gaspard wrote, adding that he would like to meet with Facebook's leadership in person to discuss the matter further. "But at bottom, this is not about George Soros or the foundations. Your methods threaten the very values underpinning our democracy."

Facebook denied the accusation of spreading anti-Semitic tropes regarding Soros, saying: "To suggest that this was an anti-Semitic attack is reprehensible and untrue."

Freedom from Facebook hit back at the social network.

“If anyone knows about spreading vile propaganda it’s Facebook and if they are hiring Republican political operatives to launch false attacks against the Freedom From Facebook coalition, clearly they are concerned about us and, judging by their stock price and employee morale, they should be,” Freedom From Facebook co-chair Sarah Miller said in a statement to Fox News. “But nothing more perfectly summarizes our policy case — that nothing will change at Facebook unless the FTC and Congress act — than everything Facebook has done over the past year, as laid out in this New York Times piece.”

A Definers spokesperson told Fox News the company is "proud" of its partnership with Facebook and that all of the work it did for the tech giant is "based publicly-available documents and information."

At the conclusion of its blog post, Facebook says it still has "a long way to go" but cites a range of measures it has taken in the two years since the 2016 election to improve safety and security and battle misinformation on the platform. Fox News reached out to Facebook for further comment on the Open Society Foundation's letter.