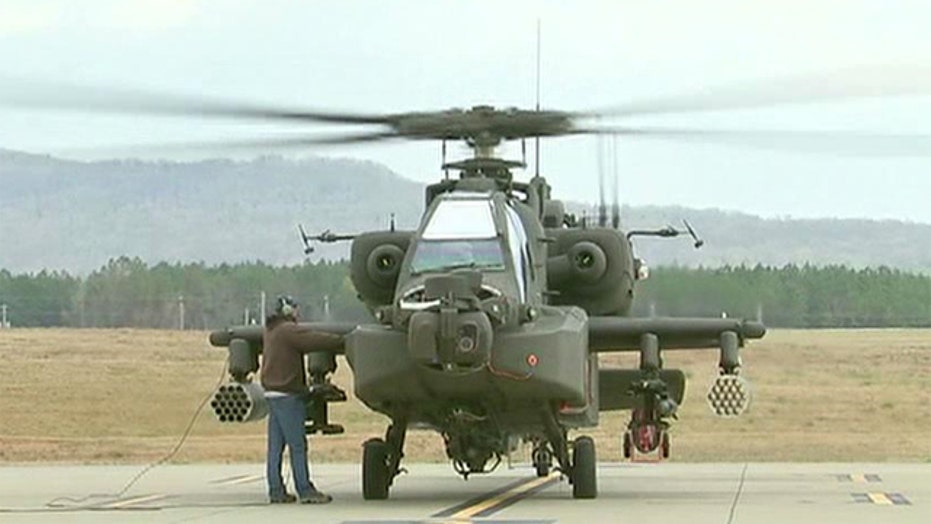 HUNTSVILLE, Ala. – The Army is testing new technology that will allow Apache helicopter pilots to see their targets up close, in high definition color.

The Modernized Day Sensor Assembly, or M-DSA, first reported by FoxNews.com in February, provides pilots, and controllers on the ground, a high resolution alternative to the grainy, black and white images they currently use. M-DSA also has improved magnification features.

“With the extended range capabilities… the pilots can quickly and accurately identify targets at further standoff ranges, which allow them to stay out of harm’s way,” said Fred Swisher, who manages the M-DSA program at defense contractor Lockheed Martin.

Hovering two and a half miles away from its target, the Apache is out of reach of most small and medium weapons fire. From that distance, the aircraft was inaudible and appeared as a small speck in the sky to a Fox News crew photographing a recent test at the Army’s Redstone Arsenal in Huntsville.

However, the test pilot was able to easily distinguish between the Fox photographer’s camera and a nearby target’s machine gun, by activating the M-DSA’s extended range, or “XR,” feature.

“Before enabling that system, all I could see was he was handling some large item and a long-stemmed item,” said Chief Warrant Officer 5 Paul Steele. “When I activated the XR, then I could make out that it was a tripod and he was mounting a block-shaped camera onto the tripod.”

Steele said he believes the new system will improve situational awareness and coordination among pilots and ground forces in combat, “especially in the kind of fight we’re in now, where you have indigenous personnel and civilians intermixed with potential military targets.”

The improved video resolution may also help prevent errors, such as the July 12, 2007 Apache airstrike in Baghdad that killed two Reuters news staff members whose camera was mistaken for a weapon.

“We have the potential with this new system to make sure that we are engaging the right targets at the right time,” said Lt. Col. Steven Van Riper, the Army’s product manager for Apache sensors. “And really that all ends up saving lives of American forces, of our allied forces.”

M-DSA is now in its final months of testing. Lockheed Martin is expected to begin production at its Missiles and Fire Control facility in Orlando, Fla. pending an Army contract in early 2015. Installation on Apache helicopters would begin in 2017.