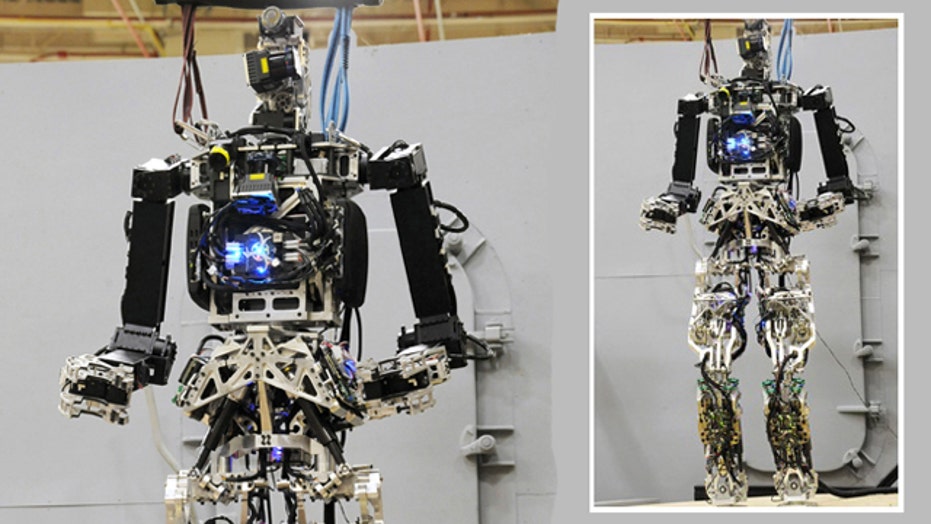 The Navy’s new humanoid robots can detect fires on a ship, withstand extreme heat up to 500 degrees, and fight the fire shoulder to shoulder with human firefighters.

Designed to fight shipboard fires at sea, the Shipboard Autonomous Firefighting Robot, known as SAFFiR, is a human-sized robot. Under direction and funding from the Office of Naval Research, Naval Research Laboratory researchers have been working with university researchers to develop the tech.

SAFFiR is meant to move autonomously throughout a ship, learn its layout and patrol for structural problems. The robot will be able to interact with the sailors onboard, and take on many of their dangerous firefighting tasks.

Recently at the LASR facility, a controlled multi-environment and state-of-the-art labs that tests out ideas before fielding them, the humanoid robots demonstrated just what they can do.

Virginia Tech and Penn students demonstrated their complex motion, agility, and ability to walk over natural and manmade terrain as well as simulated shipboard pitch and roll conditions.

They also showed how the robot could deploy their "seek-and-find" algorithms to find a fire.

The robot’s artificial muscle was showcased lifting and activating fire suppression equipment. It can open a water valve, lift the fire hose and walk with it and activate a nozzle.

Fires at Sea
Fires on the ground can be extremely dangerous with a range of challenges: the unpredictability, high temperatures, and not to mention its impact on the environmental conditions and structural integrity.

Fires on a ship can pose a serious threat to human life. Imagine you’re out at sea, on a ship, and a fire breaks out several levels down and begins to rampage through the ship. The fire must be contained and put out to not just protect human life, but to ensure the ship is ready for action.

In this cramped environment with lots of obstructions, firefighters must grapple with the darkness, smoke and more.

The SAFFiR robots will allow the Navy to reduce the risk to humans as well as damage to ships at sea.

How Does It Work?
SAFFiR is no Roomba. This robot walks on legs, can change direction and even balance in the pitch and roll sea state conditions.

Using its enhanced very advanced sensors, it can do a whole range of things. In addition to fighting fires, it can also detect fires and monitor the ships environment. The sensors help it to navigate the ship all by itself and overcome obstacles it encounters. Even obstacles that humans find challenging like "knee-knocker" bulkhead openings, it can manage.

Its sensor suite also includes a camera and gas sensor. To see through smoke and detect sources of excess heat, it also has stereo infrared and ultraviolet cameras.

When it is fighting fires, it can use a broad range of fire suppression tech, thermal shielding equipment and also work the nozzles on fire suppressors all by itself.

These robot firefighters can withstand higher heat for longer periods than human firefighters -- up to a remarkable 500 degrees Celsius.

To protect robotic mechanisms and electronics from a fire’s intense heat, NRL researchers developed a class of light-weight, high temperature sort of resin that stay strong while being malleable into a necessary shape.

SAFFiR is designed to work with humans. It understands the gestures and commands of human firefighters and can respond accordingly.

There are three key prongs to this research that is creating important advances in the pursuit of a fire fighting bot.

NCARAI has been focusing on the human-robot interaction technology to allow the robotic firefighter to work as part of a team with human firefighters and even interact with them naturally.

SAFFiR is part of the Naval Prototype program Damage Control Technologies for the 21st Century or DC-21 – a program that aims to improve shipboard situation awareness and damage control capabilities with new tech.

In addition to the robot, they are looking at smart sensors in ship spaces to provide alerts based on detection of gases and incipient fires and microflyers to provide rapid response and 3-D mapping of fire and damage.

What’s next?
The robotic teams will conduct shipboard trials onboard the ex-USS Shadwell, the Navy's only full-scale fire test ship moored in Mobile, Alabama later this year.