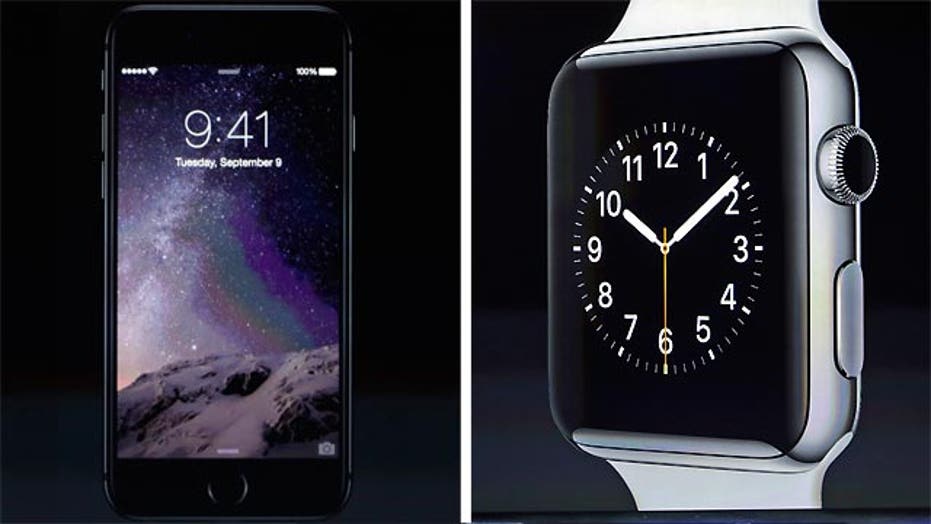 How Apple has revolutionized technology over the decades

Apple finally made its big entry into the wearable technology market on Tuesday, unveiling the Apple Watch, its long-anticipated smartwatch.

“It’s the next chapter in Apple’s story,” declared Apple CEO Tim Cook during a packed event at the Flint Center for the Performing Arts in Cupertino, California. Despite plenty of pre-event chatter that the device would be available in time for the holiday season, the Apple Watch will not be out until early next year, priced from $349.

As expected, Apple also unveiled new additions to its iPhone family at the event, with Cook launching the 4.7 inch iPhone 6 and 5.5-inch iPhone 6 Plus, which he touted as the biggest advancements in iPhone history.

They are thinner than previous versions of the iPhone, and the devices feature Retina HD displays and an enhanced A8 processor which is 50 percent more efficient than the A7 processor found on the iPhone 5s and 5c. The phones also mark the debut of Apple Pay, a contactless mobile payment technology. Companies working with Apple on Apple Pay include Mastercard, Visa and American Express and retailers such as Target and Whole Foods.

Tech analysts had hoped that Apple would launch the watch in time for the lucrative holiday season, particularly at a time when rival Samsung is ramping up its efforts in the smartwatch space.

Consumers, however, should not see the Apple Watch as a replacement for their existing devices. During his speech, Cook made it clear that the Apple Watch is not a standalone device, explaining that the watch is designed to work with the iPhone.

Three versions of the watch were launched at the event – Apple Watch, Apple Watch Sport and Apple Watch Edition, a high-end version of the technology built using 18-karat rose or yellow gold. The watch will also be available in two sizes – 38 mm and 42 mm.

Smartwatch technologies have hardly set the world alight, so consumers were keen to see how Apple plans to set itself apart from rivals. The Apple Watch certainly boasts some interesting features, such as its ‘Digital Crown’ – a small dial on the side of the device that is used to navigate through the watch’s screens.

During his speech, Cook explained that the device’s small screen made it impractical to transfer the iPhone interface to Apple Watch. Other features of Apple Watch include a “taptic engine,” which subtly vibrates to let users know when they have received a message or a notification from a source such as Facebook. Apple has also built sensors into the back of the Apple Watch to monitor vital signs such as heart rate and support the company’s drive into health and fitness technology.

Apple appears to be pushing variety as a core element of its smartwatch strategy, touting a host of different straps that can be used with the device, from a ‘Sport Band’ built from Elastomer to a leather quilted leather loop to a stainless steel bracelet.

Charles King, principal analyst of the Hayward, Calif.-based tech research firm Pund-IT, said he was surprised that Apple will not launch its smartwatch until 2015.

“It just doesn’t make any sense to me at all,” he told FoxNews.com. “If you’re going to launch a luxury item weeks before a holiday buying season starts and then tell people that it won’t be available in time for the holiday season – what’s the point?”

King also noted that some Apple users may face a costly upgrade if they want to use the Apple Watch. The device only works with iPhone 5, 5c, 5s, 6 or 6 Plus running iOS8, the latest version of Apple's operating system.

"You could be looking at spending $1,000 for a watch and a smartphone," he said. "I am sure that there are plenty of Apple fans who will pay that, but I have trouble seeing it as widely adopted as the iPhone."

The devices will be available in the U.S. on September 19.