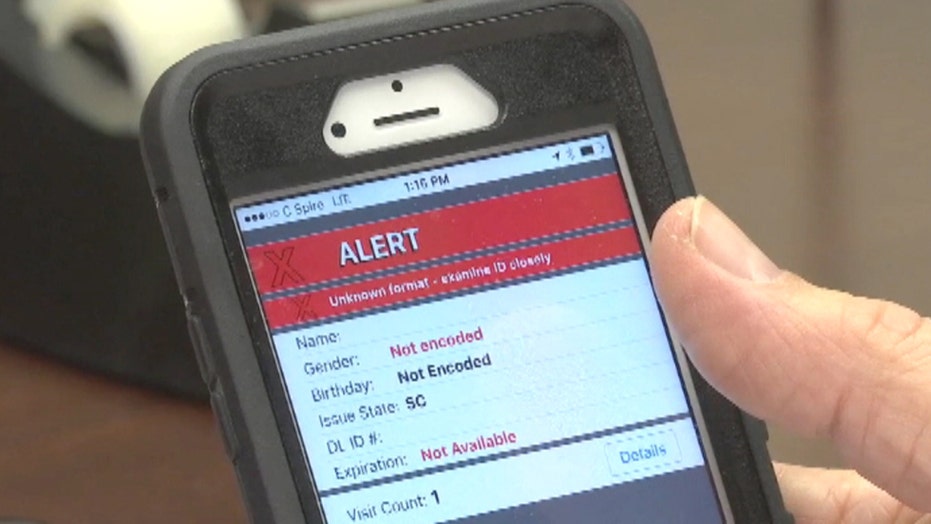 Law enforcement agencies and businesses have started using a new tool to combat the use of fake IDs. The Age ID app, developed by Intellicheck, promises accuracy and quick verification.

The app uses a phone or tablet’s camera to scan the barcode on the back of an ID such as a driver’s license.  In less than ten seconds, the app verifies the authenticity of an ID and identifies if it’s real, fake or needs a second look.

Russell Hanna, the chief of enforcement for Mississippi Alcoholic Beverage Control, says his agency started using the app during the summer of 2016.  Hanna explains authentic info from a real license barcode is often replicated and used on countless fake IDs but while the information on the front of the license may look legitimate, the barcode is difficult to re-create and contains information that does not match up.

According to Hanna, most young people purchase fake ID’s online, including some from China. He says the quality of today’s fakes are so convincing his agents often spent nearly ten minutes calling and verifying each ID.

According to a study published by the National Institutes of Health, just over 12 percent of college freshmen from a large Midwestern university reported owning a fake ID for the purpose of obtaining alcohol. That number grew to over 30 percent at the end of sophomore year for the same class.

Businesses have been using the app for a little over a year. The primary idea behind the technology is to keep age restricted products out of the hands of those who cannot legally buy them, but with a variety of licenses from all over the United States it is hard to keep up with changes. Victor Pittman, president of Silver Leaf Wines and Spirits in Ridgeland, Miss.,  told FoxNews.com.

“If they change a format or some positioning in their drivers licenses there’s no way for us to know,” he said.

The technology shows promise but it’s not 100 percent perfect.

AFTER HER HUSBAND WENT MISSING, AN APP LED HER TO HIS BODY

Intellicheck works with DMVs around the country to identify newly developed fake IDs.

“We re-do our software to catch the new points of quality that they put in to make that almost indistinguishable from an authentic license,” Roof added.

The developers of the app say that the company adheres to FBI security guidelines since the technology involves personal data.  Intellicheck also added that it does not keep any personal info, however businesses may keep information if they decide to ban a person from their establishment.

UBER ALLEGEDLY SPIED ON USERS, INCLUDING CELEBRITIES LIKE BEYONCE

The app isn’t something anyone can download from the App Store. William Roof, CEO and president of Intellicheck, says there’s a process in place to make sure businesses and law enforcement gain access.

“We’ll vet you and make sure you’re an authentic business,” Roof said. “Then you download the app and it’s a monthly subscription fee [with] unlimited scans.”

The app can be downloaded through Apple’s Business to Business (B2B) app store and an Android app is currently being developed.

The same technology behind Age ID is also used to prevent fraud in the retail industry and safeguard the country’s ports and military bases. A similar app called Defense ID is used to safeguard 23 army installations and 16 U.S. ports and high-end retailers such as Helzberg Diamonds use the Retail ID app to prevent fraudulent purchases and returns, according to Initellicheck. The technology could potentially help improve a retailer’s bottom line.  Data compiled by the National Retail Federation states return fraud and abuse was between $9.1 and $15.9 billion for 2015. There are also potential Homeland Security uses in the future.