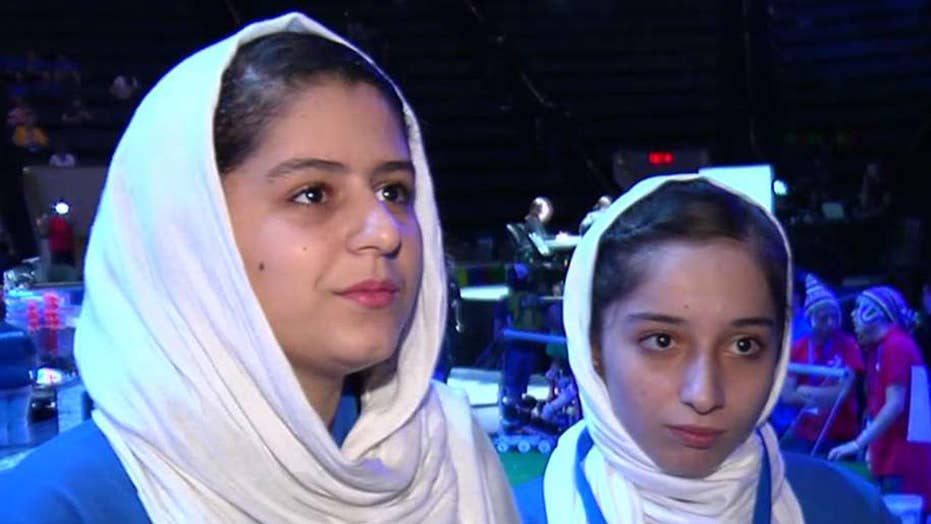 The U.S. Embassy rejected their visa applications twice, until the president intervened and reversed the decision; Jennifer Griffin reports on 'Special Report'

The Afghan girls who originally were denied entry into the United States for a robotics contest made it to the competition in time -- and received an award for courageous achievement Tuesday.

The six teenage girls, who were denied U.S. visas twice, finished in 99th place but outshined 67 other countries – including the United States – in the FIRST Global Challenge in Washington, D.C.

President Donald Trump allowed the girls, between ages 14 and 16, to enter the U.S. on July 13 after their visa rejections sparked an international backlash.

It is unclear why their visas were denied, but the State Department previously responded by saying all applications “are adjudicated on a case-by-case basis in accordance with U.S. law.”

The girls had little time to prepare -- their robot kits didn't arrive until 2 weeks before the deadline.

"When I was younger I was watching TV and saw this robot walking and wondered how such a robot could walk and talk. Now I build my own robots. It makes me feel proud," 14-year-old Fatemah Qaderyan said through a translator.

The first annual robotics competition, which aims to inspire young people to pursue careers in science, technology, engineering and mathematics (STEM), drew 163 teams from around the globe. Poland won the competition, while the United States ranked 155th.

Ivanka Trump attended the competition to meet the girls and cheer on the six all-girls robotics teams, including the team from the U.S.