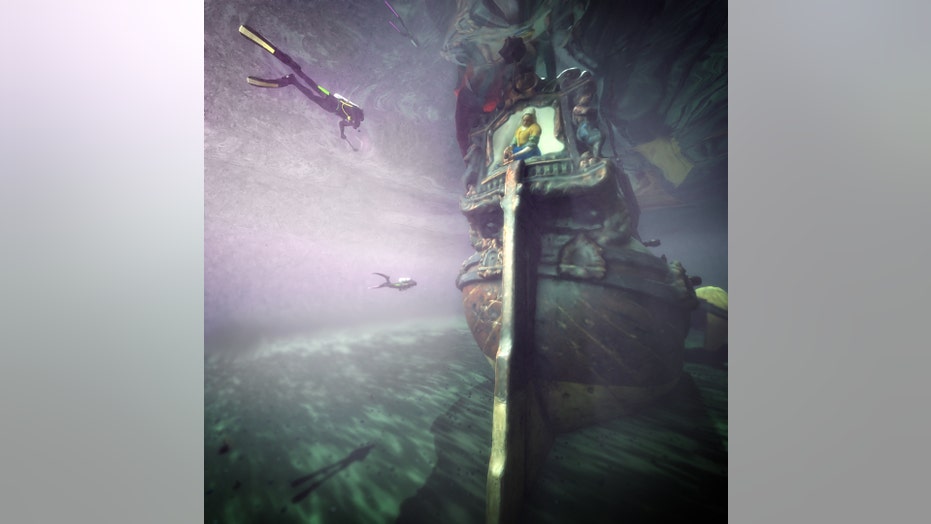 Exactly 360 years to the day since the Dutch merchant ship Melckmeyt was wrecked off a remote Icelandic island, experts have harnessed virtual reality to create a stunning virtual dive of the wreck.

The Melckmeyt or “Milkmaid” was on a secret trading mission when it sank during a sudden storm. Digital archaeology specialists from Australia’s Flinders University have worked with maritime archaeologists at the University of Iceland to create a 360-degree virtual view of the wreck, which was discovered in 1992.

The ship was lost amid international tensions over Icelandic trade.

“The kingdom of Denmark ruled Iceland and forbade other European nations from trading with the island,” explained officials of Flinders University and the University of Iceland in a joint statement obtained by Fox News. “However, in 1659 a surprise attack by the Swedish king on the Danish capital prevented any Danish supply ships from traveling to Iceland.”

Keen to grasp an opportunity for trade, Dutch merchants sent a small fleet of ships to Iceland under a false Danish flag.

“This fleet was welcomed by locals and proved a success, trading grain, timber and ceramics from mainland Europe for locally caught and dried fish, woollen goods, sheepskins and whale oil,” the universities explained in the statement.

Divers swim over a digital reconstruction of the ship during a virtual dive. (Image by John McCarthy)

However, the Melckmeyt spent too long on its secret trading mission and was caught in the storm, losing one member of the ship’s crew. “The survivors took shelter above water in the highest point of wreck for the next two days,” said the universities.

Thanks to the icy Icelandic waters, the wreck is remarkably well preserved. Fourteen years after its discovery by local divers Erlendur Guðmundsson and Sævar Árnason, a team of researchers including experts from the Cultural Heritage Agency of the Netherlands and Kevin Martin, a graduate student at the University of Iceland, completed a detailed 3D survey of the site.

“The significance of this wreck is enormous for Iceland," said Martin in the statement. "As it is one of the oldest known historic wrecks in this part of the world, it shines a light on a fascinating period of Icelandic history, when Denmark ruled the island and had a monopoly over trade here for a period of 200 years. We have also been able to directly embed a 3D survey of the seabed with full photographic texture. In theory, a member of the public viewing this might even spot something on the wreck that we have missed during our dives on it!”

A scene from the virtual dive, with divers swimming over the wreck as it appears today, with areas of the wreck labeled in yellow. (Image by John McCarthy)

The virtual dive was created by John McCarthy, a graduate student in maritime archaeology at Flinders University.

"We have even based the stern painting on a real contemporary Dutch painting, Vermeer’s famous ‘Milkmaid,' painted just one year before the ship was wrecked," he said in the statement.

A paper on the virtual dive will be presented at the annual conference of the Australian Institute for Maritime Archaeology in Brisbane, Australia, on Oct. 18.

Other Icelandic shipwrecks have been garnering attention. Earlier this year, the wreck of the Empire Wold, a Royal Navy tug, was discovered by coastguards off the coast of Iceland. The discovery solved a decades-long mystery about the fate of the ship, which disappeared during a World War II rescue mission.

A 3D scan of the shipwreck. (Image by John McCarthy)

The ship sank on Nov. 10, 1944, with the loss of her 16 crewmembers. The sinking prompted speculation that the Empire Wold had fallen victim to a German U-boat, although the ship’s discovery led experts to believe that she foundered in heavy seas and 40-knot winds.

A digital reconstruction of the wreck as it may have appeared the morning after the storm. (Image by John McCarthy)

In 2017, the SS Minden, a German cargo ship scuttled in waters near Iceland during the early days of World War II, was in the international spotlight following the reported discovery of  a chest containing up to four tons of Nazi gold on the wreck.

Correction: The headline on an earlier version of this story incorrectly stated that the shipwreck is 390 years old.