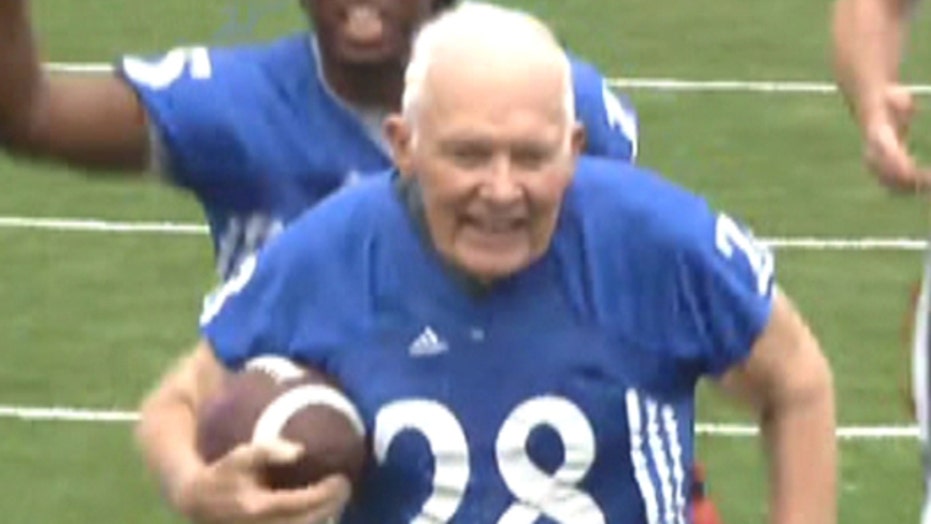 The Good, the Bad and the Ugly

An 89-year-old WWII veteran ran for a touchdown Saturday during a Kansas University alumni flag football game that brought back memories of his heyday at the school during the 1946-1948 seasons.

Bryan Sperry, whose career highlight includes a clutch catch during the 1948 Orange Bowl, managed to evade tackles during the last play of the game at the school’s Memorial Stadium, after his number -- 28 -- was called for the last play, The Lawrence Journal-World reported.

Sperry, who enrolled in the school after serving in the Army during WWII’s Battle of the Bulge, pulled in a shuffle pass around midfield and let his guards do their job.

The play was slow to unfold but Sperry -- and his blockers -- could not help but smile as he weaved in and out of players pretending to be crashing and falling into each other.

The players were close to Sperry during the entire run and seemed intent on making the run as realistic as possible. When he crossed the end zone, he was embraced by both teams.

“I had a lot of fun after I convinced them that I could play,” he joked to the paper.