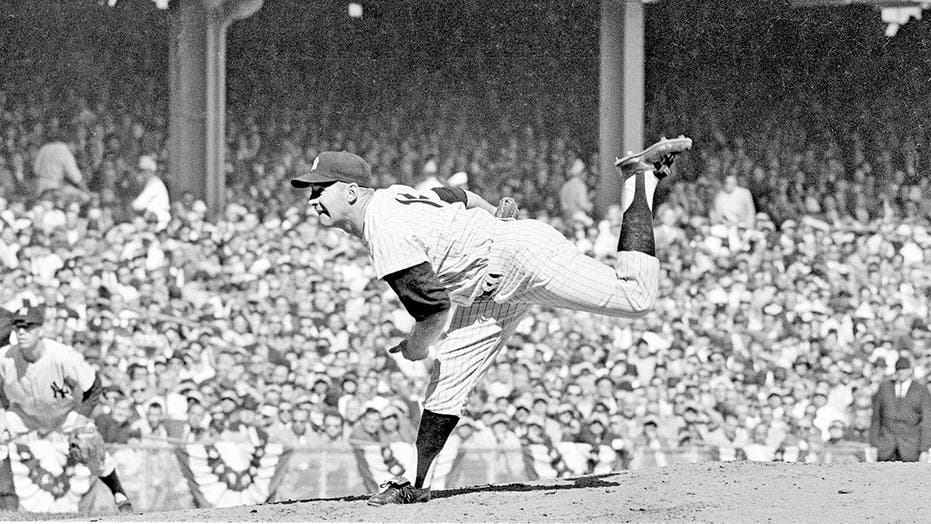 Whitey Ford, one of the most talented pitchers in baseball history, who helped lead the New York Yankees to a string of World Series wins in the 1950s and '60s, has died, the team announced Friday. He was 91.

“The Yankees are incredibly saddened to learn of the passing of Hall of Famer Whitey Ford,” the post read. “Whitey spent his entire 16-year career as a Yankee. A 6x WS Champion and 10x All-Star, The Chairman of the Board was one of the best lefties to ever toe the rubber. He will be deeply missed.”

The famous left-handed pitcher died at his home in Long Island Thursday night, a family member told The Associated Press. The cause of death was not immediately known.

The World Series record book is crowded with Ford’s accomplishments. His string of 33 consecutive scoreless innings from 1960-62 broke a record of 29 2-3 innings set by Babe Ruth. He still holds records for World Series games and starts (22), innings pitched (146), wins (10) and strikeouts (94).

In this Oct. 12, 1960, file photo, New York Yankees pitcher Whitey Ford throws during the sixth game of the World Series against the Pittsburgh Pirates in Pittsburgh. A family member tells The Associated Press on Friday, Oct. 9, 2020, that Ford died at his Long Island home Thursday night. (AP Photo, File )

But his best seasons came in 1961 and 1963 in the midst of a stretch of five straight AL pennants for the Yankees when new manager Ralph Houk began using a four-man rotation instead of five. Ford led the league in victories with 25 in 1961, won the Cy Young Award and was the World Series MVP after winning two more games against Cincinnati. In 1963, he went 24-7, again leading the league in wins. Eight of his victories that season came in June.

“Today all of Major League Baseball mourns the loss of Whitey Ford, a New York City native who became a legend for his hometown team,” Commissioner Rob Manfred said in a statment. “Whitey earned his status as the ace of some of the most memorable teams in our sport’s rich history … I extend my deepest condolences to Whitey’s family, his friends and admirers throughout our game, and all fans of the Yankees.”

Edward Charles Ford was born on the East Side of Manhattan, about 100 blocks south of Yankee Stadium. He grew up playing sandlot ball in Astoria, Queens, a section of the city that produced major leaguers Sam Mele and Tony Cuccinello and singer Tony Bennett. He earned the nickname “Whitey” while still in the minor leagues.

Ford signed with the Yankees in 1947 and would help nail down the 1950 World Series sweep of Philadelphia. After two years away for military service during the Korean War, Ford returned in 1953 and along with Mickey Mantle became the core of a team that won 10 American League pennants and five World Series in the next 12 years. Ford won 18 games in his first season back and never won fewer than 11 for 13 straight seasons.