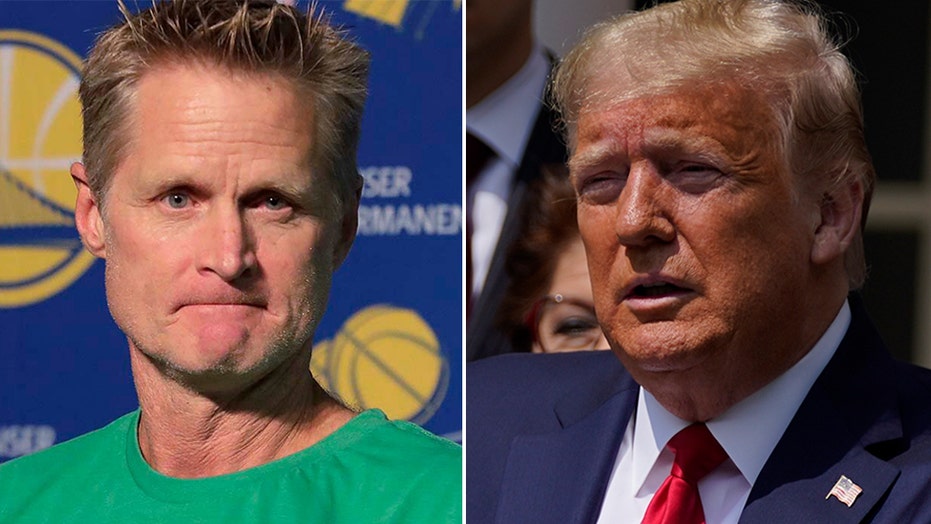 Golden State Warriors coach Steve Kerr criticized President Trump on Sunday for divulging his thoughts about going down a steep ramp following his speech at West Point earlier this year.

Kerr quote-tweeted a video from The Lincoln Project – a political action committee formed by a group of Republicans who don’t want to see Trump get reelected in 2020. Trump made his point about walking down the ramp during his campaign speech in Tulsa, Okla., on Saturday.

LAKERS OWNER JEANIE BUSS SHARES VILE LETTER SHE RECEIVED FROM RACIST FAN: 'WHY DON’T YOU LOOK IN THE MIRROR'

“There were so many directions he could have gone- Covid-19, unemployment, the murder of George Floyd, systemic racism, global warming, etc. Instead he chose the ‘whiny victim’ route. THIS is our president????? We deserve better. Register to vote,” Kerr tweeted.

MAVERICKS' MARK CUBAN ON PLAYERS KNEELING DURING NATIONAL ANTHEM: 'HOPEFULLY I'D JOIN THEM'

The current Warriors coach, whose team was not a part of the 22-team restart plan for the NBA’s return in Orlando, Fla., later this summer, has been one of Trump’s biggest detractors since 2016.

Kerr, along with San Antonio Spurs coach Gregg Popovich, have been the loudest voices against the president in the NBA coaching ranks.

Earlier this month, Kerr mocked Trump for holding a Bible in front of a church as photographers and the press took photos of him.

“I feel so much better seeing him hold the Bible. Now I know he is a moral man driven by family values and a strict set of personal ethics. This changes everything,” he tweeted at the time.