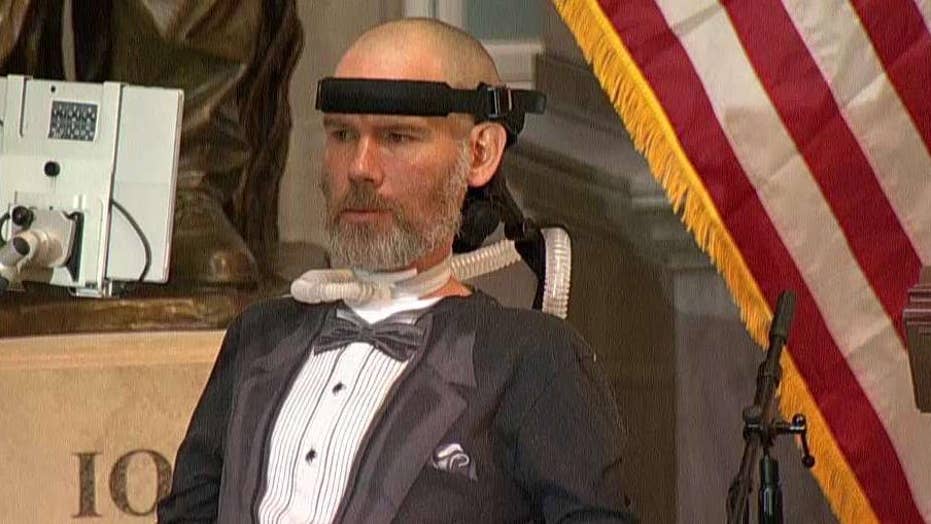 Former New Orleans Saints safety Steve Gleason, who become a leading advocate for people struggling with Lou Gehrig’s disease after he was diagnosed with the paralyzing illness, was awarded the Congressional Gold Medal during a ceremony Wednesday.

"We as a country, and more appropriately, we as a global species face enormous challenges in the coming decades of the 21st century," Gleason said at the ceremony.

Safety Steve Gleason #37 of the New Orleans Saints walks on the field before the start of the game against the Jacksonville Jaguars on December 21, 2003 at Alltel Stadium in Jacksonville, Florida. (Photo by Jamie Squire/Getty Images)

Gleason, 42, thanked his family and said his children give him a reason to live and make a better tomorrow.

Gleason, who played seven seasons in the NFL, all with New Orleans, received a standing ovation after he received the medal.

The medal features Gleason in a Saints jersey. Images of a mountain and the forest pay homage to his native state of Washington.

Saints quarterback Drew Brees showed up to support his former teammate, and he spoke at the ceremony, fighting back tears.

On the field, Gleason is best known for his exhilarating blocked punt from the Atlanta Falcons during the Saints’ first game in the rebuilt Superdome following 2005’s Hurricane Katrina. The city was still rebuilding from the devastating hurricane when Gleason dove to block a punt in the opening minutes of the game against their rival.

Gleason’s play was such an important part of the team’s history and the city’s recovery that it was immortalized in a 9-foot-tall bronze statue outside the stadium called “Rebirth.”

In January 2011, he was diagnosed with Lou Gehrig’s disease, or amyotrophic lateral sclerosis (ALS), a degenerative neuromuscular disease that left him paralyzed.

"Talk about feeling undeserving! The list of past winners is filled with enlightened and powerful giants of humanity. It's ridiculously overwhelming," Gleason told the Saints official website earlier this week.

In a statement posted to Twitter, Gleason said he felt “undeserving” but “honored.”

He concluded: “I am honored and accept the Congressional Gold Medal for all the families who have been diagnosed with ALS, as well as anyone struggling to overcome life’s inevitable adversities.”