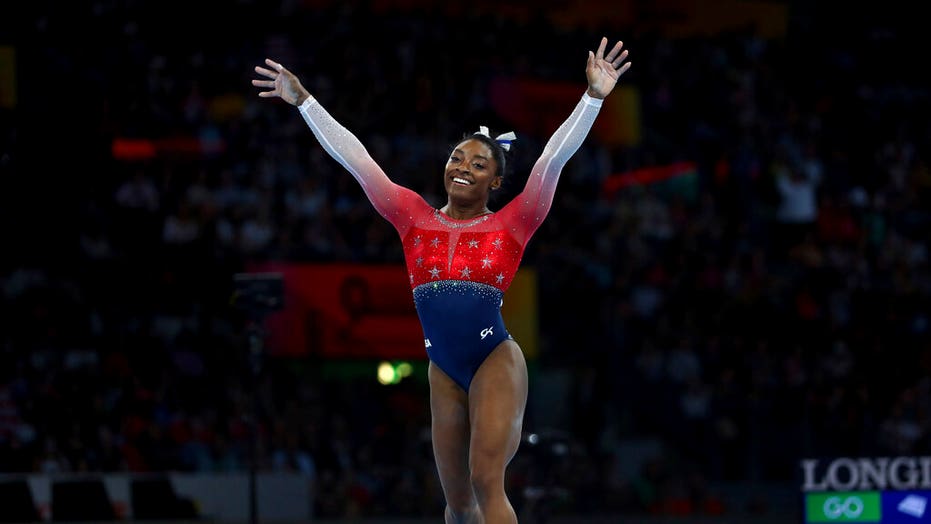 Simone Biles is often known for her record-setting skills and spectacular performances, and on Tuesday, she achieved another feat — setting a new record at the gymnastics world championships.

Biles, 22, won her 21st medal and her 15th career gold at the event in Stuttgart, Germany, breaking a tie with Russian gymnast Svetlana Khorkina for the most individual medals overall by a woman at the event. The U.S. women's gymnastics team won its fifth all-around title in a row at the event.

The Texas native is now just two medals shy of beating Belarusian gymnast Vitaly Scherbo, who holds the all-time record of 23 medals among men or women.

Simone Biles, pictured here on the floor during women's team final at the Gymnastics World Championships in Germany on Tuesday, surpassed a record when she won her 21st medal for the event. (AP Photo/Matthias Schrader)

“I think that’s really impressive for someone to be able to do that; I guess that’s me,” Biles told The Washington Post. “I haven’t got a chance to process it yet, but I think we’ll do some celebrating tonight for all of it — for the team, for the medal count, for the fifth year in a row.”

The U.S. team scored 172.330 points to beat second-place Russia by 5.801 points and win its seventh consecutive team title at an Olympics or world championship.

Two gymnastics moves are expected to be named after the 22-year-old, who posted the best individual scores on the vault, balance beam and floor at the championships. Biles successfully landed a double-double dismount — consisting of two flips and two twists — on the balance beam; the move will be known as "The Biles" in the sport’s Code of Points.

Biles landed a triple-double — a double backflip with three twists — during her floor routine on Saturday; that move will be known as "The Biles II."

In addition to her record-breaking 21 medals at the world championships, Biles also has five medals - four gold and one bronze - from the 2016 Olympic Games in Rio de Janeiro.