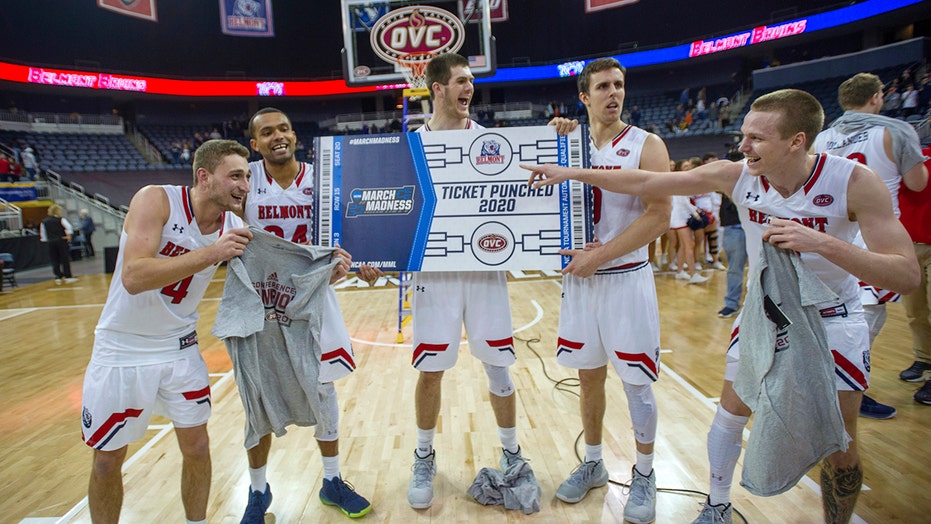 Tyler Scanlon scored 17 points including a layup with three seconds remaining to give top-seeded Belmont a 76-75 victory over second-seeded Murray State on Saturday night in the championship game of the Ohio Valley Conference tournament.

Belmont (26-7) won its third OVC tournament and an automatic bid to the NCAA Tournament. It was also the third consecutive time the teams have met in the title match. Murray State (23-9) had won the previous two.

"It was a heckuva game played by two really good teams." Alexander said. “I'm glad we had the last possession.”

Nick Muszynski scored 25 points to lead the Bruins, and was named the tournament MVP. Adam Kunkel added 16 points and Grayson Murphy had 10.

Brown hit two free throws to put the Racers up 75-74 with 11.5 seconds to play. Following timeouts from both teams, Kunkel passed the ball to Scanlon cutting under the basket for the game-winner.

“It was a play we practice all the time. With all that preparation in the final moment there were no nerves. It was second nature and just execution," Scanlon said.

Belmont's biggest lead was eight points while Murray State had their biggest lead with seven. There were eight lead changes and seven ties. Belmont had a 48-38 advantage in points scored in the paint.

“Our players executed a lot of good actions. We made some big shots and big 3s in the second half,” Alexander said. "It was a meaningful win".

A basket from Muszynski and a Kunkel 3-pointers gave Belmont a 33-32 advantage at the break.

“When you grow up dreaming of playing and coaching college basketball, there are games like this you want to be in," Murray State coach Matt McMahon said. “It is disappointing we could not get the one stop at the end.”

Belmont: The Bruins were the OVC season co-champions with Murray State. They have six titles in eight years of OVC membership. Belmont has won 20-plus games and earned postseason play 15 of the last 16 years.

The 57th OVC tournament championship was held at the Ford Center for the third straight year. ... Every contest in the seven-game tournament was won by the higher-seeded team.

Murray State: Will wait and see if it earns a third consecutive NCAA Tournament bid or be part of the NIT.

Belmont: The Bruins wait to find out their seed and region assignment for their ninth NCAA Tournament bid since 2006.