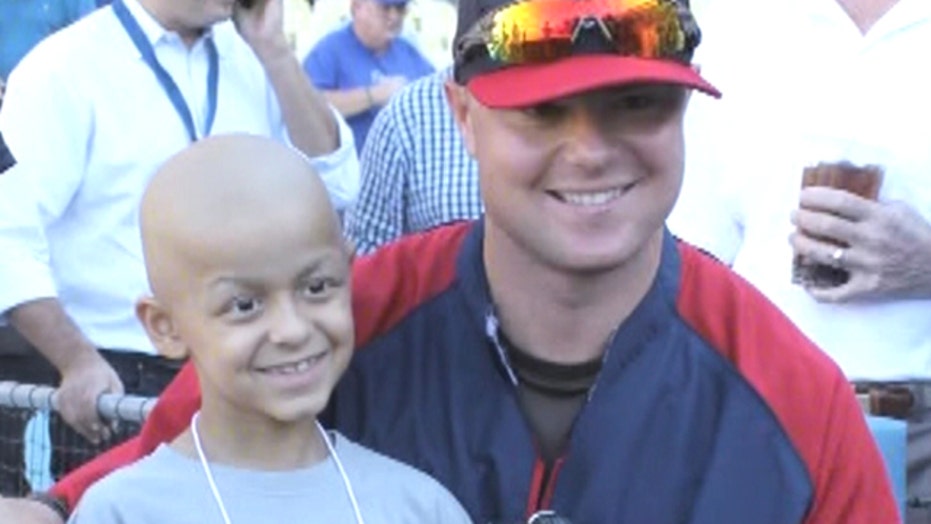 Jon Lester goes to bat for kids diagnosed with cancer

Boston Red Sox pitcher Jon Lester not only got the victory in Game One of the World Series Wednesday night, he scored another big win for fellow cancer survivors and patients when a tribute to his charity work for pediatric cancer research was spotlighted on the Fox broadcast.

Lester, whose work with cancer-stricken kids was reported on last month by FoxNews.com, has been working with the Pediatric Cancer Research Foundation to raise money and since 2007. He's also met with - and inspired - several children, including six-year-old Zein Youseff, who is fighting the disease in Southern California. During last night’s game, Fox’s Joe Buck and Ken Rosenthal talked about Lester’s work with kids – and especially noted Zein, who is undergoing treatment at Los Angeles Children’s Hospital and just started treatment of chemo therapy, radiation and bone marrow transplant.

Then they showed the national audience a recent tweet from Lester: "Big shout-out to my man Zein who is starting chemo today at CHLA! Thinking about you buddy!"

Zein caught the mention, but didn't stick around to see Lester go seven and two-thirds strong innings for the 8-1 victory. Sources close to the brave lad say he moved on to cartoons.

As for Lester, who won the clinching Game Four of the 2007 World Series, he's proving to be not only an inspiration, but an ace.